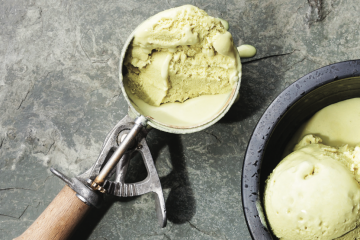 Though it's still a beloved summer treat, ice cream is travelling a bit of a rocky road in Canada. According to Mintel, 90% of Canadians consume single-flavoured ice cream during the summer months, contributing to annual sales of $284 million. (Mintel pegs the value of the entire frozen desserts category—including frozen yogurt, gelato and sorbet—at $409 million.)

But while penetration remains high, the market research firm also says Canadians’ enthusiasm for ice cream seems to be cooling: annual consumption has fallen from 7.7 litres per person in 2008 to 6.8 litres in 2015, with an older population creating “headwinds” for the category. This is part of a broader trend that has led to similar declines in established markets like the United States and Europe, while emerging markets like China continue to grow.

Despite these bumps in the road, there are positive signs for the frozen desserts category as a whole. For instance, Jenny Longo, the director of private brands for Longo’s, says sales are up 22% year over year at her family’s Toronto-area chain, fuelled in part by its award-winning private label product, Indulgent Chocolate Mousse Cups.

And, interestingly, the challenges facing the Canadian industry could ultimately benefit ice cream enthusiasts by encouraging a flurry of product experimentation. According to Joel Gregoire, Mintel’s senior food and drink analyst, manufacturers are already demonstrating a “high degree” of flavour and format innovation as they attempt to woo consumers. “Canadians are certainly interested in everything from artisanal to premium-flavoured ice creams,” says Gregoire. “‘Adultizing’ ice cream with more exotic flavours and even alcohol could create additional excitement within the category.”

But health, it turns out, is pretty low on the list of considerations for Canadians seeking ice cream or other frozen treats. In fact, only 19% of 2,000 people surveyed by Mintel named health as a key factor compared to 47% of respondents who named ingredient quality and low price as key factors, and 40% who cited flavour combinations. “What we’re seeing is flavour exploration,” says Gregoire, noting that Canadians are becoming more intrigued by ethnically inspired flavours such as green tea and mango.

In other product innovations, Häagen-Dazs has debuted its new Spirits ice cream, which features alcohol-infused flavours such as Vodka Key Lime Pie, Rum Ginger Cookie and Irish Cream Coffee & Biscotti. These products fall in line with recent Mintel research revealing that more than a quarter (27%) of Canadians are interested in ice cream with alcohol. The rise of indulgent ice creams has led some manufacturers to introduce smaller portions so consumers can enjoy them without feeling guilty. According to Mintel, 6% of all ice cream launches in North America last year contained the word “mini” in their name, up from 3% in 2015.

Last year, Unilever capped its single-serve adult ice cream products at 250 calories, creating a smaller unit size for flagship brands such as Magnum and Ben & Jerry’s, while other products were eliminated entirely. Longo says sales of single-serve products are really growing. “The bars are becoming smaller, but more premium,” she notes.

In 2016, Nestlé Canada and Unilever Canada controlled a reported 58% of the Canadian ice cream market, with Chapman’s Ice Cream a solid third. Small independents, however, are also jockeying for—and winning—space in Canadian freezers. Wayne Wikkerink, president of Lethbridge, Alta.-based Screamin Brothers, says sales of its dairy-and allergen-free frozen treats (they’re made with coconut milk), are up by as much as 25 to 30% per year.“If you can get people to taste it, it’s a slam-dunk as far as selling it,” says Wikkerink.

Elsewhere, regional brands such as Vancouver’s Betterwith—a premium, high fat product made with traceable milk and single-source ingredients—continues to make inroads with customers.

Screamin Brothers’ Wikkerink likens the rise of independent manufacturers to the growth of the craft beer industry, which has seen small independents continuing to grab market share from multi-nationals. “The ice cream business almost seems the same,” he says. “The ice cream buyers we’ve dealt with have talked about a 30 to 40% increase in sales, primarily based on high-end, high-quality niche products.”

You might say Neopolitan is being pushed slowly aside by increasingly cosmopolitan consumers.

This article originally appeared in the June issue of Canadian Grocer.