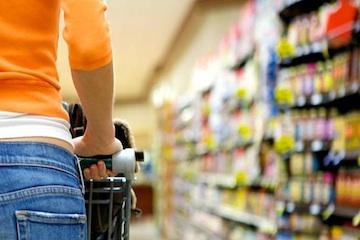 Paying off debt is a big concern for Canadians, but they’re not letting it completely dictate their spending habits, according to a new report by research firm Mintel.

The Canadian Lifestyles 2015 report said consumer spending would continue to rise, reaching $1.084 trillion this year, and increasing by 4.7% over the next five years.

The grocery gains “tie into a focus on family, as well as health and eating better— don’t necessarily want to be eating out all the time,” said Carol Wong-Li, senior lifestyle analyst at Mintel in Toronto.

Where Canadians are cutting back is on leisure, entertainment and recreation. “When families with bigger households participate in leisure activities, it’s expensive,” said Wong-Li. “So that’s the category that is going to be hit the hardest.”

Though consumers are a bit more conservative in their spending, Mintel said they’re still looking to treat themselves and are making “sensible splurges” a priority. When asked where they spend their “extra money” (once the bills are paid and the essentials have been purchased), 34% said they pay off debt, 31% said a long vacation (three or more days), 31% said dining out, 24% said small “extras” for family members, and 23% said a short vacation.

Where discretionary funds are spent largely depends on the consumer’s life-stage. Millennials are just as likely to put extra dollars towards paying off debt (32%) as they are dining out (34%). Middle-aged consumers, particularly those 35-44, plan for the future and are more likely to cite paying off debt as a priority than other age groups (45% vs 34% overall). Those 55+ are likely to be retired or planning for retirement, so they are more inclined to put extra money towards long vacations than average (39% vs 31% overall).

The survey also looked at the personal goals of Canadians. The top priorities are spending more time with family (58%), getting household finances in order (47%) and having a better work/life balance (44%). Asked about their health and wellness goals, 64% said they plan to exercise regularly, 59% said eat more fruits/vegetables, 49% said lose weight and 47% said get more sleep.

HOW BRANDS CAN CONNECT WITH CONSUMERS IN 2015

Canadians’ focus on paying off debt will continue to play into their spending choices. The key for brands and companies is to position offerings that are in line with making “responsible choices,” according to Mintel. Here are three ways to resonate with consumers this year:

This article first appeared on MarketingMag.ca