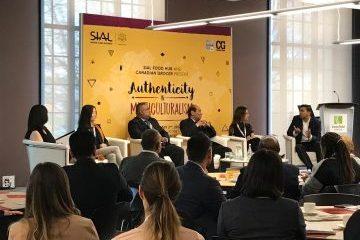 Here’s some of what we learned:

Tailor your tactics for ethnic audiences

Retailers need to keep subcultures in mind when trying to uncover their shoppers ethnicity profiles, said David Wilkes, senior vice-president, Retail Council of Canada, during his presentation “The Canadian grocery industry – What does the future hold?”

Wilkes urged the audience to think about how they’re marketing to the “right subsector in the appropriate way and not just creating a broad swath. There are very different ways to communicate to communities within communities.”

How to connect with ethnic consumers in store

Anyone who identifies as an ethnic consumer is expecting more from grocers than ever before, said Salima Jivraj, managing director at Nourish Food Marketing, during the SIAL Food Hub hosted by Canadian Grocer on day one of the exposition.

Some consumers want ethnic options, but aren't comfortable visiting ethnic grocers or halal butchers, for instance. Cleanliness, product assortment and language barriers are a few of the factors at play, said Jivraj. This is an opportunity for mainstream grocers to step up their game.

Educating front line staff is a key component to better servicing ethnic consumers. “ to understand what the product is. You have to taste the product, if you don’t know what it tastes like, how are you going to sell it?” said Ravi Maharaj, category manager, ethnic fresh at Sobeys.

Packaging is another important element when catering to ethnic shoppers. For instance, halal consumers tend to have larger households so food companies think about portions sizes, noted Jivraj. Also, packaging “doesn’t need stars and moons or mosques to look authentic.”

Canadians think the country is in recession

Despite some optimism around their personal finances and future job prospects, most Canadians think the country is still in a recession and are cautious when it comes to spending, said Wilkes. Research shows consumers are spending money on experiences and in areas such as technology, most of which are considered treats and not necessities.

Consumers are approaching grocery shopping in a similar way, spending more on the products that make life easier or on indulgences including sauces, natural cheese and home replacement meals.

And if experiences are what consumers are looking for, it’s what grocers need to provide. “In-store experience plays a key role in developing and strengthening an emotional connection between consumers and brands,” said Wilkes.