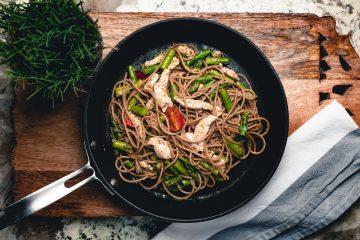 The jury is still out on the success of meal kits in Canada, and the same can be said for North America as well as globally. Their story is one of varied results but, ultimately, sustained growth since initially surfacing in today’s familiar format around 2012.

When they debuted, the novel concept attracted heavy press attention and interest from consumers. The prospect of conveniently delivered unique recipes with simple instructions for preparing healthy meals caused some to wonder whether meal kits might upend much of the packaged foods industry. Early entrants, such as Blue Apron in the United States, advertised aggressively on podcasts, betting on young and affluent consumers who might be interested in paying a premium for convenience, health, novelty and interactive food experiences. Initially, this strategy seemed to pay off. The company’s sales soared, resulting in challenges to meet demand and, eventually, an attention-grabbing IPO on the New York Stock Exchange.

Blue Apron, however, quickly began to struggle as subscriptions declined, forcing employee layoffs and giving investors cold feet that led to threats of delisting it as its stock price dramatically plummeted. Blue Apron’s struggles skewed perceptions of the entire meal kit segment as press narratives focused on the company as a symbol of the segment’s broader performance. Many declared the death of meal kits, blaming struggles on high subscription costs, convenient and more affordable alternatives, the business model’s elusive profitability and consumer concern over the amount of waste associated with all the plastic materials in which these products come packaged.

While these challenges certainly exist, it is becoming apparent that the Blue Apron narrative is quite distinct from the rest. Both in Canada and globally, meal kits appear to be faring significantly better than the severe struggles Blue Apron has endured in the United States. HelloFresh, for example, has seen growth across several markets, hoisting the brand to global leadership and more than US$1.4 billion in projected global sales in 2019, according to Euromonitor International. Smaller brands such as Goodfood and Chefs Plate are also maintaining healthy performances and growing in popularity among Canadian consumers.

Distribution strategies continue to evolve for this segment. Leading meal kit pioneers such as HelloFresh have focused on online delivery subscription models. However, partnerships with grocery retailers—which give meal kit companies the opportunity to sell in physical outlets—have materialized in Canada and elsewhere. Some retailers are even developing their own meal kits to sell in store. Metro, for example, invested in Montreal-based MissFresh and began offering MissFresh’s products in its stores. <At press time Metro announced it is selling MissFresh.>

Longo’s, too, has embraced this trend, developing its own meal kits sold in store and online, with both economy and premium-priced lines to attract a wider array of consumers. Retailers are attempting to entice shoppers already on their premises to purchase a convenient and interactive meal generally priced lower than those sold online and delivered directly. This movement toward in-store meal kit offerings seems to signal some success, or at least expected future success.

It isn’t clear yet how high the ceiling is for this industry, how much individual companies operating within it will continue to grow or whether in-store sales can be a long-term viable counterpart to online sales of meal kits. The challenges to the segment are real and may prove damaging in the long run. For now, Blue Apron’s drastic change of fortune appears to be an exception to the rule rather than a symbol of the segment’s health, with most brands in Canada, the United States and many other markets continuing to sustain strong momentum.