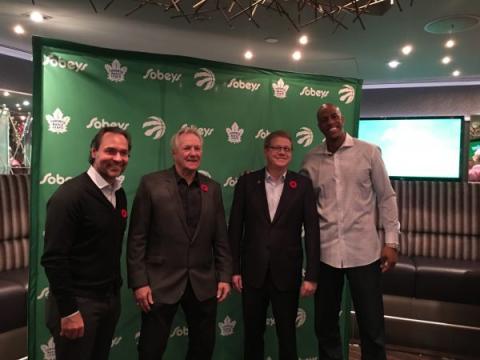 Sobeys has launched a partnership with Maple Leaf Sports & Entertainment, which involves the retailer becoming the official grocery store for all six of MLSE’s teams: the Toronto Maple Leafs, Toronto Raptors, Toronto Argonauts, Toronto FC, Toronto Marlies and the Raptors 905.

“Two things that unite families in this country are sports and food,” said Sobeys president and CEO Michael Medline, on hand to kick off the official partnership launch event at the Hot Stove Club at Toronto’s Scotiabank Arena.

“They bring people together, and Canadians have an emotional connection to food and to sports. In my family, we love sitting around the dinner table and talking about the Raptors, the Leafs, all the MLSE teams; or snacking in front of the TV, cheering on Matthews and Kyle, Marner and Kawhi.”

Medline explained that all the Sobeys banners in Ontario would be involved in this partnership, including Sobeys, FreshCo, Foodland, and soon, the newly-acquired Farm Boy chain.

“We’re going to share this partnership with our customers and the fans of these six MLSE teams—in the stores, in our flyers, in the arena, on the court, with in-game features, and we’re going to get busy activating and being part of social media,” said Medline.