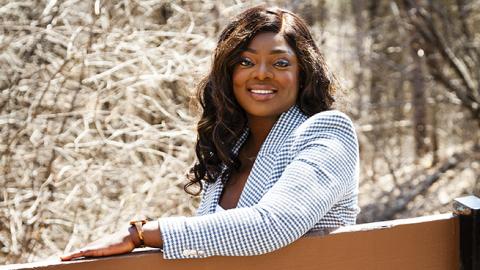 When Lola Adeyemi first arrived in Canada from Nigeria in April 2005 to attend the University of Winnipeg, the shift was a bit of a shock to her system, given Manitoba was in the middle of a deep freeze. "It was my first taste of a Canadian winter," she recalls. "I cried evert other day."

Fast forward to 2021, and things are heating up for Adeyemi. Now based in Toronto, the entrepreneur is enjoying success with It’s Souper, a company she founded that makes soup and chili inspired by the flavours and culinary traditions of Africa. While her products are now expanding into major retailers like Sobeys and Whole Foods Market, the path to this point has been filled with highs, lows, and even moments where she thought she should just give up on her dream of launching a business.

If it wasn’t for that dream, she may have stayed in information technology, the career she embarked on after graduation. “I spent 10 years there,” she says. “Though I was good at it, I started feeling like I wanted something more.”

Adeyemi initially thought she might launch an African-inspired line of leisure and athletic wear, but the fashion world didn’t seem like a good fit. Friends and colleagues nudged her toward the food business. At office potlucks, her home-cooked Nigerian dishes were big hits. Leftovers were quickly divvied up among her co-workers who took the food home and asked for more.

“I realized then that I enjoyed sharing my food with people,” she says. “I knew it was something they hadn’t tasted before.” Browsing the aisles of supermarkets, Adeyemi noticed there was a gap in the market for African food. Soup was a logical place to start filling the void. She thought the existing selections were dull and there was room for soups with a global fusion of flavours. Soup also had universal appeal as a comfort food, and was familiar to Adeyemi since it was a staple in her family.

Before she developed her final lineup of premium products, she secured her domain name (itssouper.com) and trademark, and designed a logo. Still, she admits: “I didn’t know what I was doing; I knew nothing about the food industry.” Fortunately, at that time (2017), Toronto incubator Food Starter offered a program to help startups determine whether their ideas were feasible as businesses. Ademeyi signed up so she could find out.

Though she completed the course, she felt out of place as its lone Black female participant and still felt unsure about the path forward, wondering if she should just give up. But a one-hour mentor meeting (included with the program) changed everything. Her mentor, food consultant John Hale, thought she could make her soup company work. “He gave me so much help in terms of next steps and who I needed to talk to,” she explains. “I was able to do a soft launch in the summer of 2018, which generated good buzz. It told me that I had to keep going.”

She was able to secure financing and found a co-packer for her products to get things moving, but distribution was still a challenge. Adeyemi was doing it all on her own at first, asking mom-and-pop stores to carry her brand. “It’s a real estate game when it comes to the food space,” she says, “and so I would just keep knocking on doors. Out of 10 stores, maybe two would come back to me.”

Today, a growing number of grocers including Fiesta Farms, Foodland, Whole Foods Market and McEwan are stocking her products. And this year, she was able to get listed with Sobeys after her mentor connected her with the Vendor Engagement Program, which aims to bring Canadian-made innovations to its customers. Sobeys recommended that she switch from plastic tubs to plastic pouches, and once she did, things fell into place. Her product lineup—which now includes Moroccan Chickpea & Chicken Stew, Roasted Carrot & Paprika Soup, West African Pepper Sauce and Meat Lovers Chili—is currently available across Ontario, and plans are underway to expand elsewhere in Canada and the United States, along with plans to launch new products.

Looking ahead, Adeyemi sees opportunities to share her West African culture on a larger scale. “I’m Nigerian, so many of the recipes I use are based on my experience,” she says. “As It’s Souper grows, my dream is to have chefs from across Africa create amazing recipes we can launch in Canada. This country is a fusion of cultures, so why not carry that over to food? It brings out the best in us.”