Anthony Bourdain? If you’re a fan of Bourdain’s CNN show, Parts Unknown, you’ll know what I mean. Each episode, the celebrity chef takes viewers on a boozy jaunt of the backwaters and alleys of a country’s culinary traditions. It’s a mouth-watering look at dishes around the world. It’s also a fascinating peak into how culture shapes cooking.

Canada is unlike many of the locales Bourdain drops in on, such as Thailand, Tur- key or Brazil. Instead, we’re a multicultural haven with the highest share of foreign-born citizens of any G7 country. Over the past decade alone, more than two million people have made Canada their home, changing how, and what, we eat.

Immigration has affected our culture and our kitchens. We’re a nation that loves trying other people’s foods. New research makes the point: Mintel’s “Ethnic Foods and Flavours” report finds nearly all Canadians eat, or are interested in, ethnic-inspired dishes. Our favourites? Chinese (96%) and Italian (95%).

Why do we rejoice in more than back bacon and poutine? Our research finds Canadians choose ethnic-inspired foods to “explore new flavours” (63%), followed by the “search for an adventurous dining experience” (36%). Further, nearly three-quarters (73%) of us like to experience other cultures through food. More than half are open to trying internationally inspired foods, more so now than they were a few years ago.

What does this mean for food retailers and CPGs? One takeaway: start using themes of exploration and adventure in messaging of international foods. Ethnic foods don’t just represent new flavours; they serve as a means to explore the world without leaving the comforts of home.

Our research also reveals where in the world Canadians are looking for new dishes to try. When we asked Canadians what foods they “have not eaten, but are interested in trying,” cuisine from Africa and Southeast Asia sprang to the top. (See chart, below.)

In Southeast Asia, the Philippines should be of particular interest for retailers and CPGs. According to Statistics Canada, Canadians of Filipino origin are among this coun- try’s fastest-growing ethnic groups. A good example of a retailer addressing Filipinos is Seafood City. The American supermarket chain plans to open its first store in Canada by early next year, in Toronto. Seafood City focuses on Filipino cuisine, such as adobo, pancit and lechon (whole roasted crispy pig).

Africa represents an opportunity to expand Canadians’ palates. It’s an expansive continent with diverse cultures and cuisines to match. Boerewors, a favourite sausage dish in South Africa for barbecuing, could spice up Canadian summers. Flavours of Africa can be infused into many dishes. For instance, Mozambique boasts hot piri piri and creamy coconut sauces with cashews and peanuts, drawing inspiration from a history that infuses Portuguese, Asian and Arab gastronomy. In Nigeria, Africa’s most populous country, jollof rice is a favourite and may be the origin of Cajun jambalaya. Perhaps just a few of the cuisines the Anthony Bourdain in all of us would love to try. 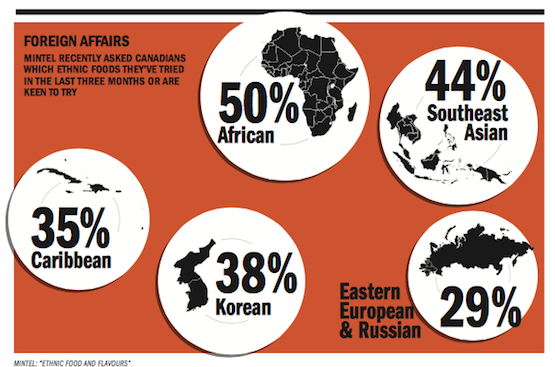