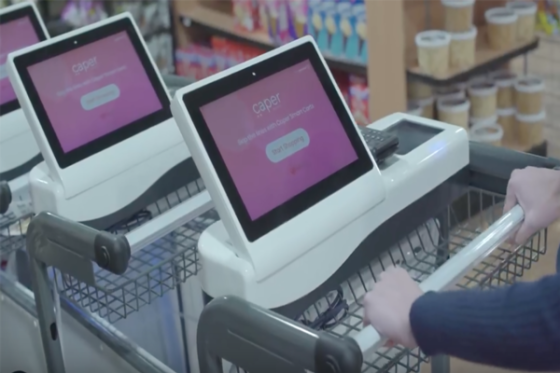 THE RISE OF THE “SMART STORE”

From electronic shelf labels and digital wayfinding tools to smart carts and even checkout-free stores (à la Amazon Go and its ilk), the digitally powered “smart store” looks to be the way of the future. In October, Instacart acquired smart cart company Caper AI, further blending the in-store and online shopping worlds. And while Amazon Go was the first big example of cashier-less stores with the debut of its “just walk out” technology in 2018, there’s now a proliferation of similar stores—including Canada’s Aisle 24 (with locations in Toronto and Montreal) as well as Tesco, which recently launched its own checkout-free GetGo in the United Kingdom and Carrefour Flash in France.

“We’re very much seeing this blending of the digital and physical worlds of shopping. Up until very recently, I think many supermarket retailers that got into e-commerce always thought of it as, ‘Well, online shopping happens over there, and my physical stores are over here, and never the two shall meet. They’re two different things.’ But they’re not, not in today’s world,” says Gary Hawkins, CEO of The Center for Advancing Retail & Technology (CART). He notes this blending of digital and physical includes everything from shoppers simply using their smartphones to scan QR codes in the store to learn more about products to smart carts that help customers not only navigate the store, but also offer recipes, product suggestions and the ability to check out right in the cart, skipping the checkout line.

For Sylvain Charlebois, senior director, agri-food analytics lab at Dalhousie University, a big focus of all of this is the “exit” part of in-store shopping. “I call it ‘Grocery Exit 2.0,’” he says. “The exit part of the grocery experience has always been mismanaged, in my view. And those things like Amazon Go and the smart cart, I see this as more of a focus on making the exit experience better.” He views these two solutions as different approaches to the same issue: “One is an infrastructure-heavy model, which is Amazon Go and the like; and the other one is empowering the customer, using tools in real time as they go through the store themselves. [With the smart cart] you basically tool them and they’ll go in different directions and they’ll design their own experience, their own way, based on their own needs.” Charlebois sees the smart cart as a more practical, less infrastructure-heavy tool for a grocer to invest in, as opposed to the complete overhaul needed to implement a cashier-less store like Amazon Go.

Vinayak Madappa, an advisory partner at information technology services firm Capgemini, believes the pandemic has accelerated many smart store technologies. “From my perspective, a big part of the smart store evolution happened due to the change in consumer behaviours, and that was largely accelerated through the pandemic. But if you look at it, consumers, by nature, what do we want? We want convenience, we want speed. We want localization and personalization,” he says, noting things like digital wayfinding (to help speed up the shopping trip), electronic shelf labels and increased digitization of the in-store experience can address many of these wants. “And with COVID and the post-pandemic world, as normal as it gets, it’s going to include contactless.”

For CART’s Hawkins, however, it’s computer vision technology (a key part of Amazon Go’s “just walk out” tech) that’s one of the biggest game changers. Put simply, computer vision is a complex computer system that essentially “sees” as a human would—so it’s more than just recording video of what’s going on, but also uses artificial intelligence (AI) to “understand” what it’s seeing. “On the retailer side, the technology I’m watching, which I think is really going to be transformative, is the computer vision ... and that space is moving really fast,” he says. “They opened the first Amazon Go store in 2018 and it was about an 1,800-sq.-ft. store. Then about a year later, they opened a 10,000 sq.-ft. store. Then Amazon Fresh opened this year at 25,000 sq. ft., and they’re taking [the “just walk out” tech] to a Whole Foods store of 37,000 sq. ft. next year.”

While that gives an indication of how quickly it’s growing and scaling, Hawkins says computer vision’s significance is going to be greater than most retailers expect. “The sexy part of it right now is, as a shopper, I can walk in and I can walk out ... But in my mind, that’s just the beginning,” he says. “What that technology is really doing is digitizing that entire physical store, and opening the door to countless other applications and benefits that can sit on top of that.”

As an example, Hawkins says with a computer vision platform in-store, “I know how many people are coming in the front door, every minute of the day. I can feed that information to my scheduling systems, so I know how many people I need to have in the meat department, or the bakery department, or how many rotisserie chickens to have out, and so on.” It also provides 24/7 monitoring of out-of-stocks, he adds. “The camera sees when product goes out of stock on the shelf, and can automatically notify somebody at the store to refill it. Might seem like a little thing, but out-of-stocks represent around 8% of sales lost. So it’s a huge thing.” This can also have big benefits when it comes to e-commerce: “If you connect a computer vision platform to e-commerce, as soon as that last item was sold, it can automatically be shut off in the digital store. When it’s restocked, it can automatically be put back,” he says.

What’s more, a computer vision platform can monitor accidents in the aisle, slip and falls, somebody dropping a bottle of salad dressing; it can also monitor shoplifting and security. “Then the big area that excites me is linking that shopper behaviour data: where the shopper goes in the store, how long they spend there, etc. ... in my mind, when you’re talking about the physical store, it’s that computer vision plat- form that I think is going to be the most transformative.”

Deciding which smart store innovations to invest in is undeniably tricky, but Hawkins says now is not the time to sit back while others innovate. “Retailers have often preferred to let a competitor try some new tech or innovation or process, figure it out, make sure it works, and then they’ll [invest in it themselves],” he says. “I don’t believe that’s a safe business strategy anymore. We live in a world of exponential growth of these technologies, computer vision being a classic example of that. And forward-looking retailers today, of all sizes, can’t look at what’s going on today around this solution or that capability. They’ve got to be looking out a year, two years, three years, four years from now. And that’s what should be driving their investments.” Capgemini’s Madappa agrees. “There’s always that question of what’s table stakes versus what’s innovation,” he says, “and, in my view, innovation is becoming table stakes.”

But wait, there's two more trends! From voice technology to AI analytics, click through to Canadian Grocer's December 2021-January 2022 issue to learn more about the tech that is taking over grocery.