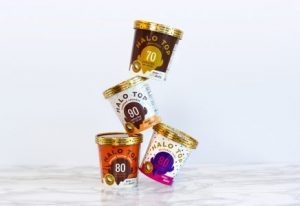 While the ice cream industry may be declining in this country, experts and industry insiders believe companies serving less sinful scoops may have found a niche product that appeals to health-conscious consumers

In March, the first pints from Los Angeles-based Halo Top Creamery went on sale in Canada. The company brought only half of the 24 dairy flavours it sells in the U.S., including birthday cake, and pancakes and waffles. A few months later it introduced four of its 14 American dairy-free pints. In September, it added a limited edition pumpkin pie--the company's first seasonal flavour in Canada.

"With the demand that we had and the proximity, we thought it made a lot of sense to start in Canada as we look to expand internationally," said president Doug Bouton, adding a Canadian expansion was the no. 1 consumer demand.

Also in March, Montreal-based CoolWay started selling its rebranded low-calorie ice cream in grocery stores. The company, previously named CoolWhey, sold high-protein ice cream in gyms and supplement stores before realizing more opportunity lay outside the gym rat niche. It created a recipe and plastered the calorie content on its bright blue pints. The eight flavours range between 280 calories at the lowest for vanilla bean and 390 at the highest for the seasonal special gingerbread cookie.

"It didn't make sense to be in grocery stores for just a few people who really look for protein. So, in order to capitalize on a bigger market, our only option was to go after the calorie trend," said marketing director and co-founder Benjamin Outmezguine.

There's an overall decline in the Canadian ice cream market. Revenue for the production industry fell at an annualized rate of 0.1% between 2013 and 2018, according to estimates from a report by IBISWorld, a market-research firm. It anticipates 0.1% growth between 2018 and 2023.

Creating an ice cream that is a bit more permissible to eat any time during the day, not just in the evening when tired adults look for a reward from a tough day, can be a way to drive sales, he said.

The products' health claims can also alleviate people's guilt about consuming snacks, he said, pointing to CoolWay's 28 grams of protein per pint.

People are also increasingly looking for healthier options. Seventeen percent of Canadians find low or reduced calories an important factor when choosing ice cream and 23% want to try one high in protein, according to findings from an online survey in the company's 2016 report on the country's ice cream and frozen novelties market.

"If you were to capture 17% or 23% of a market, you'd be doing pretty well for most companies," said Gregoire.

He compares the niche to plant-based food offerings. The number of consumers interested in alternative protein may appear low, but big companies are watching the space as an emerging opportunity.

Ice cream for the health-conscious crowd is not necessarily new. Skinny Cow, for example, has been selling low-calorie ice cream in various forms since the '90s.

But those products were targeted more as a diet ice cream for women, he said. The company's logo once featured a cartoon cow in a seductive position with a tape measure loosely wrapped around its trim waist.

What makes companies like Halo Top and Cool Way stand out is their focus on quality ingredients and indulgent flavours, while still managing to limit calorie and sugar intake, said Gregoire.

"The one thing that I think ice cream makers will never be able to sell is that this is purely a health food," he said. "If you want to eat healthy, you're probably going to look for kale or other foods."

Even big, international brands are entering the space. Nestlé recently launched its Goodnorth brand which is available in four flavours ranging between 360 and 380 calories per pint--all with more than 20 grams of protein.

Both Halo Top and CoolWay see room for expansion in Canada and beyond.

Halo Top's Bouton wants to get the pints into even more grocery stores, as well as other channels, like convenience stores.

The company runs three scoop shops in Los Angeles, and depending on their success is open to testing the model in Canada.