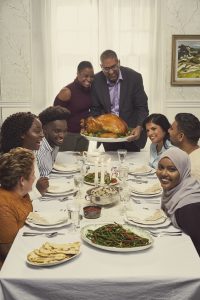 "The Norman Rockwell painting is an iconic image that comes to mind when you think of a family around the table ready to dig into their Thanksgiving feast, but we felt we needed a Canadian identity," says Craig Evans of the Canadian Poultry and Egg Processors Council and a Turkey Farmers of Canada representative. "Since Thanksgiving really is a holiday for all, the goal with these portraits is to welcome all Canadians of all ages and cultures to the tradition of the Thanksgiving turkey feast."

The magazine campaign is specifically aimed at what Evans called "turkey newcomers," such as new Canadians and millennials, in an effort to get them to consider turkey for Thanksgiving.

But turkey represents a small portion of overall meat consumption in Canada, with its per capita consumption of 4.2 kilograms dwarfed by that of chicken (33 kg) and beef (25.4 kg). According to Agriculture and Agri-Food Canada, its $391.8 million in sales last year represented less than 1% of the total cash receipts for Canada's farming operations according.

Earlier this year, Turkey Farmers introduced a new marketing campaign called "Think Turkey," aimed at getting consumers to think of the other other white meat when it comes to their everyday protein needs. The campaign is part of a broader five-year promotional effort that will include paid search, ads running across YouTube and television, plus paid influencers. "It’s important we remember this is a long-term strategy," says Evans of the campaign. "Consumer patterns don’t change overnight, but we are certainly headed in a positive direction."

Evans says  turkey is also well-positioned as more Canadians contemplate plant-based or flexitarian diet. "We’re in a unique position since turkey is lean, rich in vitamins and high in protein, so it’s a great option for those who are mindful of their diets and even those who are enjoying more plant-based foods," he says.