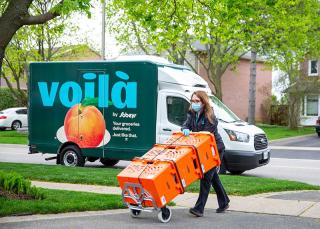 Voilà by Sobeys is headed to The Pacific Province.

Delivery in the province is scheduled to begin in 2025.

Powered by British company Ocado, the new CFC will benefit from updated technology which, according to a press release, will be more efficient and have a lighter carbon footprint.

For instance, the bots "are five times lighter and require less energy and power to achieve the same throughput as the previous generation," the release said.

"Ocado's central fulfillment and home delivery model is proving to be the most efficient on the market while delivering the best customer experience," said Sarah Joyce, SVP, e-commerce, Empire. "Ocado's recent innovations are making it even more efficient and sustainable – both for our business and the planet."

Empire launched Voilà by Sobeys in June 2020, servicing customers in the Greater Toronto Area from its CFC in Vaughan. Construction is currently underway on CFCs in Montreal and Calgary.

When all said and done, the service will reach 75% of Canadian households and approximately 90% of e-grocery spend, said Joyce.

"We strongly believe that central fulfillment is the most profitable solution at scale, and that Voilà will be the top e-commerce grocery retailer in Canada," she said.