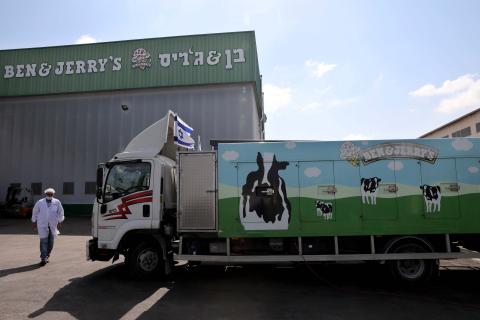 A Ben Jerry's ice-cream delivery truck at the company's factory in Be'er Tuvia near the southern Israel city of Kiryat Malakhi on July 21, 2021. Shutterstock

Ben & Jerry’s founders say parent company Unilever “usurped” its independent board in the decision to sell its ice cream business in Israel-occupied Palestinian territories to a local licensee.

Ben Cohen and Jerry Greenfield told Mehdi Hasan on MSNBC on Sunday (Sept. 18) they “can’t sit idly by” after the British multinational consumer goods company allegedly breached the terms of the acquisition agreement signed in 2000.

“This is essentially an issue of governance. Unilever signed a legally binding agreement at the acquisition of the company and that agreement gave authority over the social mission to the independent board of Ben & Jerry’s,” Cohen said. “Unilever has usurped their authority and reversed a decision that was made. We can’t allow that to happen.”

Earlier this month, Ben & Jerry’s announced plans to file an amendment to its lawsuit against Unilever by Sept. 27. Unilever’s response is due Nov. 1.

The Burlington, Vermont- based company pulled out of the West Bank in July 2021.

In June of this year, Unilever announced it had reached a deal to sell Ben & Jerry’s local operations to Avi Zinger, the owner of American Quality Products Ltd (AQP).

“Under the terms of Unilever’s acquisition agreement of Ben & Jerry’s in 2000, Ben & Jerry’s and its independent board were granted rights to take decisions about its social mission, but Unilever reserved primary responsibility for financial and operational decisions and therefore has the right to enter this arrangement,” Unilever stated in a June 28 press release.

Ben & Jerry’s then sued its parent company on July 5. But the courts ruled against the 44-year old ice cream brand on Aug. 22.

“Ben and I were not involved in that decision, but the decision by the company not to sell ice cream in the occupied Palestinian territories is consistent with the values the company has had throughout its history of fighting for human rights and dignity,” Greenfield said to Hasan on MSNBC.

Greenfield said the founders did “everything” they could not to sell the then-public company 22 years ago.

“In order for us to sell the company, it was essential that we had this unique agreement in place and without the agreement, the sale never would have occurred,” he said. “We did what we could to really assure that the values of the company would remain in place."