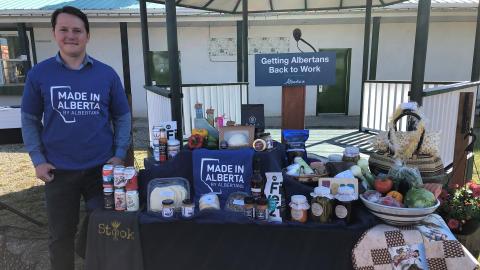 Agriculture and Forestry Minister Dreeshen introduces the new Made in Alberta, by Albertans label at the Millarville Farmers’ Market.

The Alberta government is introducing a label to help grocery shoppers quickly identify food made in the province.

The “Made in Alberta, by Albertans” label will be introduced by Agriculture and Forestry. “[P]eople want to know where their food comes from, and this will make it a lot easier for them to choose food from Alberta,” said Alberta’s Minister of Agriculture and Forestry Devin Dreeshen, in a release. “When you buy Alberta food, you are supporting another Alberta family. It keeps money in your community and in our province.”

Dreeshen announced the new label at a farmers’ market in Millarville, Alta. on the weekend. He said the label would only be finalized following consultations with farmers, processors, grocers and consumers this summer to prepare rules for its use. “It is a really good campaign we are launching here today, there is going to be lots of consultation to make sure we get it right,” he said. “And we can have the right amount of regulation so that it doesn’t get abused.”

According to the government, food and beverage processing is one of the largest employers in the province’s manufacturing sector, employing about 28,000 workers with record food manufacturing sales of $15.5 billion last year. And, Albertans have shown an increased interest in buying local food, with sales in direct-to-consumer channels (farmers’ markets and farm retail) more than doubling since 2008 and exceeding $1.2 billion in 2020.

Asked about supply chains during the pandemic, Dreeshan said it was extremely stressed and another good reason for Alberta to boost its own food system. “And we saw lots of Albertans want to know we can be self-reliant as Albertans,” he said. “The big takeaway is that the ‘Made in Alberta” logo is something we’ll be able to see on Alberta-made products for years to come.”