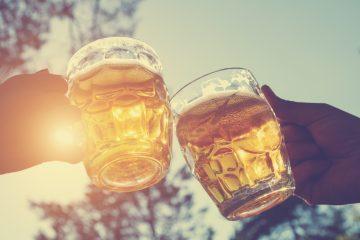 Complex flavours, natural ingredients and small-batch production aren’t buzzwords Canadians have traditionally associated with non-alcoholic beers, wines and spirits—but that’s rapidly changing. Driven by the “sober curious” movement of Canadians who are reducing or eliminating their alcohol consumption, consumer interest in non-alcoholic beverages is growing, and producers are responding to the demand with innovative products designed to be just as enticing as their alcoholic counterparts.

According to market research provider Euromonitor International, non-and low-alcoholic beer grossed US$124.5 million in Canada in 2019, and sales were forecast to grow by more than 10% in 2020. Dave DeBlois, category manager -soft drinks, juices & drinks, alternative beverages & tobacco at Sobeys, says its stores have seen “strong growth” in both non-alcoholic beer and wine sales year over year. “In the last couple of years, we’ve really seen this category grow and become much more mainstream,” he says.

Jo-Ann McArthur, president and chief strategist at Nourish Food Marketing, says younger demographics are spurring the demand for alcohol-free alternatives. “We saw generations like millennials and gen Z drinking less than their parents,” she says, “partly because they wanted to differentiate themselves, and partly because of the sober curious movement.”

Although millennials and generation Z may be the primary force behind the growth of the non-alcoholic beverages market, Steve Zmudczynski, vice-president of on-premise & emerging growth for Molson Coors Beverage Company, notes that non-alcoholic beverages appeal to all health-conscious consumers. “It does skew female,” he says, “but it’s engaging gen Z all the way to baby boomers.” He adds that the “premiumization” of the category in recent years is also sparking the interest of new consumers.

Bob Huitema, founder of Toronto’s non-alcoholic Sobrii 0-Gin, agrees premiumization creates a snowball effect that drives further innovation and interest. “As the demand goes up, the quality of products goes up, and then it feeds itself.”

Like Zmudczynski, Huitema says health is a common motivator among his customers. With this in mind, many non-alcoholic beverages feature better- for-you benefits. Sobrii 0-Gin, for example, is made with natural ingredients and has zero calories. Similarly, Calgary’s Partake Brewing offers non-alcoholic beers with as few as 10 calories per can and features polyphenols that are said to help strengthen the immune system.

McArthur notes that the pandemic has caused a dip in the growth of the non-alcoholic beverage category, but she doesn’t expect the impact to be long-term. She points to Google Trends reports that showed 2021 searches for “Dry January”—a popular month-long alcohol-free challenge—were down by more than 50% in Canada compared to the previous year. “But the Atlantic provinces are at the same level as last year,” she says. “The trend is taking a bit of a pause with COVID, but in the Atlantic bubble, where life has been more normal, it hasn’t. I think that tells us that coming out of COVID, the sober trend will continue.”

In spite of the pandemic, George Bachoumis, head of retail for Toronto’s McEwan Fine Foods, says its stores have seen about a 10% increase in sales of non-alcoholic beers and wines this year. McEwan displays these non-alcoholic beverages in the same aisle as chips and snacks. Sobeys takes the same approach in some provinces, according to DeBlois. In provinces where Sobeys’ stores are permitted to sell alcoholic beer and wine, however, the non-alcoholic versions are typically displayed near their alcoholic counterparts instead.

The latter is a smart approach where possible, according to Molson’s Zmudczynski, who estimates that 75% of customers who buy non-alcoholic beverages also purchase alcoholic ones. Nourish’s McArthur draws a comparison to the flexitarian movement. “It’s not an ‘or’ it’s an ‘and,’” she says. “There was a great study that showed when Beyond Meat was shelved with the meat burgers, sales went up,” she explains. Non-alcoholic beverages are, therefore, best displayed with their alcoholic counterparts to offer customers more choice.

Since health-consciousness is key for today’s consumers, McArthur predicts that we’ll start to see more non-alcoholic beverages with added functionality. She points to the Ireland-based Naked Collective’s So.Beer, a non-alcoholic beer set to launch soon in Canada, which is known for its “ImmunoBoost” blend. “It’s going back to the need statement and why people drink,” she says. “Is it to give a boost? Is it to relax? I think adding functional ingredients allows you to address those different need states.”