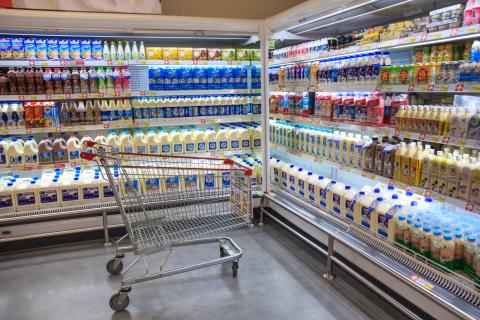 Milk prices in Canada could be going up for the second time in a year following a rare request by Dairy Farmers of Canada for a mid-year price hike due to inflation.

Canadian dairy farmers are grappling with never-before-seen price increases on goods and services they need to produce milk, the industry lobby group said in a statement Thursday.

Yet industry observers say people can't afford another price hike. They warn that dairy processors will likely tack on extra increases if the request is approved, pushing retail costs to untenable levels and increasing food insecurity in the country.

"The companies piggyback on top of those increases so it becomes a double hit," Gary Sands, senior vice-president of public policy with the Canadian Federation of Independent Grocers, said Saturday.

"Canadians are facing very significant affordability pressures on basics like milk and eggs. [Dairy Farmers of Canada have] lost sight of the impact on the consumer.''

The Canadian Dairy Commission said in a memo Thursday it received a request from Dairy Farmers of Canada in late May to trigger the "exceptional circumstances process" and allow a mid-year milk price hike.

The commission said it would hold consultations later this month and issue its decision around June 17.

The federal body, which oversees Canada's dairy industry and supply management system, said the milk price increase would be effective Sept. 1, if approved.

Dairy Farmers of Canada declined to share how much of an increase it's seeking.

"The lack of transparency is a problem," Sylvain Charlebois, Dalhousie University professor of food distribution and policy, said Saturday.

"They just assessed the cost to produce milk in Canada and pushed through a record increase. Now out of the blue they need more and they're giving stakeholders only a couple weeks to prepare for consultations, which are not going to be public."

Dairy Farmers of Canada said the farm gate price of milk was adjusted in an entirely open process.

"This transparency is one of the many benefits Canadians get from our supply management system," the group said.

Dairy prices are normally reviewed once a year in Canada. This annual process can create a gap between the true cost of producing milk and the annual adjustment, Dairy Farmers of Canada said.

"The exceptional circumstances require a mid-year adjustment to alleviate this gap," the group said.

In less than a year, fertilizer costs have risen 44%, fuel is up 32% and animal feed has increased 8%, Dairy Farmers of Canada said.

Sands questioned whether the price of milk would be lowered should those input costs ease.

"If those supply chain challenges pushing up costs start to recede in the coming months, will they be reducing prices?" he asked.

Meanwhile, in addition to a proposed increase in milk prices, egg prices are also on the rise in many provinces.

The company said the mandated egg board base price increase would amount to 18 cents per dozen on all conventional "Grade A" eggs.

That increase comes in addition to a rise of 12 cents a dozen Burnbrae Farms said it planned to implement on Aug. 28.

"You're going to see the dairy industry continue its decline because more Canadians will look for substitutes," he said.