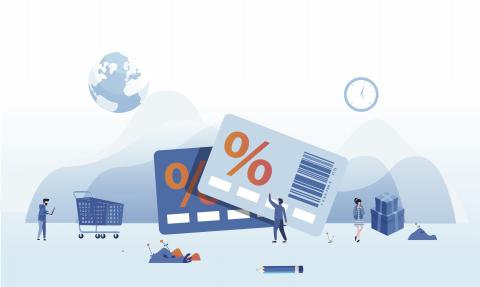 Natasha Macmillan had a stack of loyalty program cards in her wallet before COVID-19.

But as the pandemic forced her to switch from frequent, smaller grocery shops to a massive shop every two weeks, she began to focus on one rewards program and used it faithfully.

Now she earns enough points to cover an entire grocery shop for her family of four every few months.

"We were spending so much on groceries anyways we wanted to maximize our points," said the 34-year old Ottawa resident and director of everyday banking for Ratehub.ca.

"So we stuck to one store and accumulated points really quickly."

As Canada's inflation rate rises at its fastest pace in nearly 40 years, consumers are searching for ways to save money on essential goods and services.

Research shows Canadians are increasingly leaning on loyalty programs as the cost of everything from gas to groceries rises.

A survey by Drop conducted by Dig Insights found 62% of respondents said they were redeeming loyalty points to help manage expenses.

"For the consumer, it's really a no brainer,'' said Derrick Fung, CEO of Drop, a mobile rewards platform designed to help shoppers earn cash on purchases at various retailers

"We're going through tough economic times ... so the ability to earn points is really appealing."

Loyalty programs allow shoppers to earn points that can be redeemed for free groceries, cash back rewards or access to promotions, special deals and coupons.

The programs have proliferated in recent years, with a recent Shopify report noting that more than 90% of companies have some type of rewards program.

Last month, grocery giant Empire Co. Ltd. became co-owner of the Scene Plus program operated by Scotiabank and Cineplex Inc., Loblaw has its PC Optimum program, and Air Miles can also be used to accrue points at different grocers.

For retailers, a loyalty program can help attract and retain customers while increasing the so-called lifetime value of a customer, Fung said.

"These programs can encourage consumers to shop more frequently at the retailer or spend more with each visit," he said.

Unlike store-specific loyalty programs, some shoppers might get better use out of generic programs that can be used across various retailers, Macmillan said.

Credit cards, for example, often reward users with points for shopping at various stores, as does the Drop program— which Fung called "agnostic."

"We have no exclusivity to any merchant," he said. "We have multiple grocers, multiple airlines ... across every category we allow the consumer to choose what they want."

While consumers can use loyalty programs to earn points and save money, experts have raised privacy concerns with the way loyalty programs use customer information as well as data breaches.

Also, customers should protect themselves from "rewards inflation," Macmillan said.

Retailers can change the value of their points at any time, she said, potentially making your points worth less the longer you wait to redeem them.

"It's recommended that card holders earn and burn their points," Macmillan said. "If you're inclined to save points for a flight or a big grocery shop, it might be better to actually focus on smaller redemptions as you go."