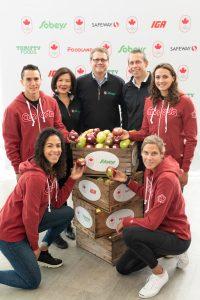 For the first time ever, Canada’s Olympic team has an official grocer.

Crowds of Empire staff, all dressed in red shirts for Canada, filled the main floor to watch the announcement, while the festivities were broadcast to Empire offices across the country.

“There are two things that unite our country: sports and food. So what a great combination we’re announcing today,” said Michael Medline, Empire’s president and CEO, addressing the crowd.

Empire's soon-to-be-launched e-commerce platform, Voilà by Sobeys, will also be the official online grocer of Team Canada; and Medline announced there would be a special partnership with the women’s hockey team specifically, with Empire becoming the “exclusive partner of the Canadian National Women's Hockey Team.”

While the full details of the company’s Olympic-related marketing campaign won’t be unveiled until early 2020, the company said healthy food and nutrition would be a key focus of the sponsorship program.

McColl, Masse, Filion and McBean participated in a panel discussion where they answered a number of food-related questions, including what they eat before a big competition, what they eat after intense training, how to make sure athletes eat properly at the Olympics in an unfamiliar country, and how food can bring teams together.

Former Olympic rower McBean had the room laughing when she shared her typical post-training breakfast. “I would have three poached eggs, a double order of toast, a bran muffin, a Belgian waffle, coffee … and then an hour later we’d go out for another breakfast,” she said, as the crowd erupted in laughter. “Food is really important for rowers, and some rowers say it’s why we row.”

Medline called the Olympic partnership “a huge coup for Empire,” and congratulated Sandra Sanderson, Sobeys' senior vice-president of marketing, and her team for securing it.

“The marketing team has been working on a very significant campaign that we’re looking to bring to life as we get a little closer to the Tokyo Games,” Sanderson told Canadian Grocer.

“We’re so excited about the opportunity; we see this as a defining moment in our brand evolution at Sobeys.”

She added, “We really believe that there’s such a powerful connection between family, food and sports.” Last November, for instance, Sobeys announced it would be the official grocery store of all six Maple Leaf Sports and Entertainment teams, including the Toronto Maple Leafs and Raptors.

“We have been starting to engage with many different sponsorships over the last few years, and this, to us, was the pinnacle of where we could bring all of our sports commitments together,” said Sanderson.