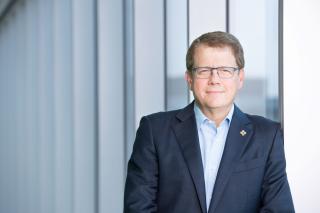 A more positive way of doing business has emerged during the pandemic, known as kinder capitalism, and Michael Medline, president and CEO of Empire and its wholly-owned subsidiary Sobeys, hopes it’s here to stay.

“I hope we don’t go back to a business as usual approach because what I saw, especially in the first months of the pandemic, was the best behaviour from capitalism that I had seen.”

Medline and Scotiabank president and CEO Brian Porter were speaking April 27 to an audience at the University of Toronto’s Rotman School of Management and online, about their contributions to the book Unprecedented: Canada’s Top CEOs on Leadership During COVID-19.

Not once during the pandemic did the dozens of CEOs he spoke to talk about maximizing profits, Medline said. Instead, “what they were trying to seek out were better ways to work with their people, protect the customers and give back to the country and be part of something bigger.”

In the pandemic’s first weeks, “Plexiglas became all-consuming” as companies did whatever they could to keep their people safe, Medline said. “I think sometimes that’s forgotten…Everything else was put to the side. Our customers and our teammates, their health and safety was really all we cared about in the early days.”

Sobeys cornered the Plexiglas market at one point and had it in stores across the country in three weeks, he said. “Whatever we could do to keep people safe — remember, we didn’t know how bad this could be — we would do.”

What’s beautiful about the Plexiglas story, he said, is that the team was “so nimble and fast, it set the tone for the rest of how we reacted to the pandemic.”

When the chips are down, it becomes clear whether companies’ claims about values, principles and cultures are true, Medline said.

He described a discussion during the pandemic’s fourth week about getting as much PPE as possible when one executive asked how much it would cost. “Omigod, the poor guy, people were yelling on the Zoom ‘What are you talking about? These are our teammates and customers.’ He was asking what we normally would ask – but that’s when you knew the values, the priorities were kicking in.”

Relationships matter, Medline added. He recounted calling executives he knows well at Cineplex and MLSE (Maple Leaf Sports & Entertainment) when they were shut down during the pandemic and asking them for their PPE “And they came through. And we would do the same for them and we’re doing things with them.”

Medline said his biggest pandemic learning is that most good ideas came from frontline workers, not executives. “We can trust them to do almost anything and make smart decisions on behalf of our teammates and our customers.”