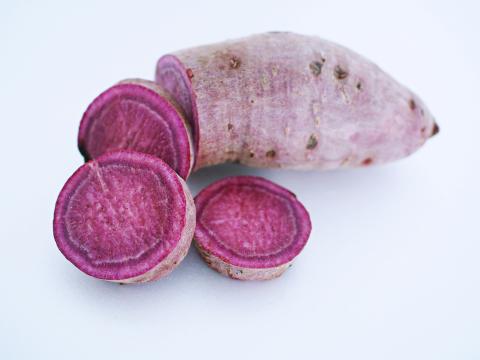 A starchy purple yam grown in the Philippines, ube (pronounced OO-beh) has long been popular in the Southeast Asian country. With a mellow nutty character and hints of vanilla and pistachio, it is the star ingredient in many Filipino desserts, from cakes, flans, and jelly rolls to jams (called halaya), ice cream and more, turning everything it touches into a vibrant violet. That has recently made ube a social media sensation, raising the profile of the tuber globally. “It is very photogenic, and getting lots of love on Instagram,” says Jo-Ann McArthur, president and chief strategist of Nourish Food Marketing. She says consumers also rightly assume the purple hue makes ube good for you; its pigment comes from anthocyanins, an anti-inflammatory that blueberries are also rich in.

Last summer, Ramar Foods announced the ube flavours of its Magnolia ice cream brand would be limited, due to supply issues from the Philippines caused by COVID-19. (The U.S.-based Filipino food manufacturer imports ube to make frozen treats for North American distribution.) But there was another reason as well: surging demand. “Sales of our ube ice cream perform two times better than all of our other flavours of tropical and Asian fruits,” says Gabriel Quesada, strategic project management lead for Ramar Foods. But when the pandemic hit, sales surged “between 10% and 20% depending on our ability to supply it, up from the national average for ice cream [in the single digits per year],” he says. “Our conclusion was that it has been very much a comfort food during the pandemic.” In Canada, Ramar has expanded distribution from small ethnic stores to bigger chains, like T&T Supermarket and Seafood City, and Quesada thinks “it’s just a matter of time” before mainstream grocers carry Magnolia. Pointing to social media, the subtle nutty taste and the popularity of plant-based diets, Frances Cefaloni of Mississauga, Ont.’s Marylenn’s Filipino Fine Foods also believes “ube goodies could expand outside Filipino grocery stores.”

Given ube has a short, temperamental growing season, it’s rarely imported as a tuber in North America. (Those are often purple sweet potatoes from the United States you might see in the produce section.) Typically, ube is sold frozen in grated form, or as an extract or jam. Ethnic food retailers in Canada also import ube-related packaged desserts, like condensed creamers, candies (Aiza’s Sweets is a popular brand from the Philippines) and biscuits. Grocers also turn to local suppliers for baked goods made with ube. Seafood City (with locations in Calgary, Edmonton, Scarborough, Ont., Mississauga, Ont. and Winnipeg), for example, partners with Marylenn’s Filipino Fine Foods in Mississauga, Ont. Since the company was founded by her mother, Marylenn Solis, in 2017, pastry chef Frances Cefaloni says “every year we have been seeing a steady increase in demand for all of our ube products, between 20% and 40%.”