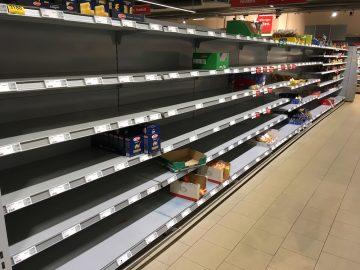 Canada's grocery stores won't run out of food and essentials despite unprecedented demand amid the novel coronavirus outbreak, the chief executives of the company's big grocers say, though it may take a bit of time to restock certain products in some stores.

"The issue of course is that we're seeing demand in our stores of historic proportions--never before seen," Michael Medline, CEO of Empire Co. Ltd., said in an interview.

Over the company's 113 years in business, it has never experienced such an influx of customers, Medline wrote in an open letter to customers dated Monday.

READ: How Canadian grocery is dealing with COVID-19

Canadians flocked to grocery stores in recent days to stock up on food and supplies as the country recorded more cases of coronavirus, resulting in crowded stores and photos circulating on social media of empty shelves.

"Inside the stores, there will be shortages in every grocery store in different categories on a daily basis because demand is outstripping any way you could possibly amp up your supply," Medline said, in an interview.

But the company's staff is working with suppliers to refill any temporarily out-of-stock products and keep shelves full.

"We're running at levels we would never have thought possible," he said.

In some cases where it's more efficient, the company's suppliers are transporting their products directly to stores rather than Empire's distribution centres.

"The food supply chain in this country is working better than it ever has before because it's a crisis."

"We are not running out of food or essential supplies," wrote chief executive Galen Weston, adding the company's supply chain and store teams are working on getting the most important items back on store shelves, though some products, such as hand sanitizer, may take longer to restock.

"Volumes are already normalizing somewhat, and we are catching up," he wrote.

The company is also planning for contingencies, said Catherine Thomas, a Loblaw spokeswoman, to ensure it can continue to serve Canadians under a number of possible scenarios.

Metro Inc., which owns and operates about 950 grocery stores and 650 drugstores under a number of banners, did not immediately respond to a request for comment.

A letter from its CEO Eric La Flèche on the company's website said it was "taking the necessary steps to avoid stock shortages as much as possible."

"Our distribution centre, store, pharmacy, and online grocery teams are making every effort possible to ensure product availability and to meet the recent spike in demand."

Sobeys and Loblaw both say they won't hike prices of any products to take advantage of the demand, and are introducing a special shopping hour for seniors and other at-risk folks who need to shop in person to do so without battling the broader crowds.

Those who can, should stay home, said Medline, but some will need to shop in person.

The company is asking its customers to respect that the first hour of operation daily at many of its stores is now reserved for seniors and at-risk populations.

Loblaw customers should check with its local stores to confirm whether this so-called seniors' shopping hour will be within existing or adjusted hours, Thomas said.

The companies are working hard to keep food on the shelves and offer people a safe shopping experience.

"We never thought ... that grocery stores would be essential services... the front line," said Medline, calling his staff, especially the cashiers "absolute heroes" during the outbreak.