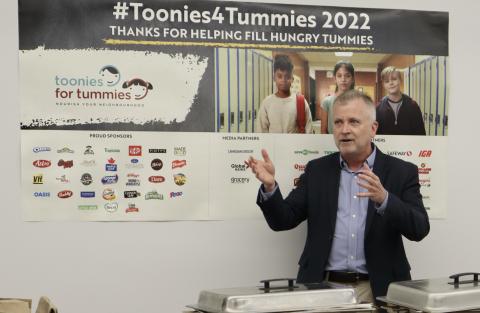 Around 50 retail and CPG leaders gathered in Mississauga, Ont., on Thursday morning to pack 720 breakfasts for kids. The occasion also marked the end of The Grocery Foundation’s 2022 Toonies for Tummies, a campaign that raises crucial funds to support more than 5,000 school breakfast programs in Canada.

“When kids arrive at school, they should be thinking about learning that day and not about being hungry. The unfortunate reality is, though, that as many as one in three [kids] are at risk of showing up at school hungry. And that makes it difficult for them to learn,” Shaun McKenna, the Foundation’s executive director, told the group, which included representatives from Sobeys,Metro, Longo’s, Burnbrae Farms, PepsiCo, Kellogg, Olymel and others, along with representatives from Student Nutrition Ontario (The Angel Foundation).

Empire president and CEO Michael Medline, who also serves as chair of The Grocery Foundation, remarked on how impressive it was to see competing grocery retailers and CPG companies stepping up and working together for such an important cause. “Kids going hungry is a mammoth problem,” he said, adding that food insecurity not only impacts physical health, but mental health, too. “This is just a fantastic cause that we’re going to keep feeding.”

According to The Grocery Foundation, the 2022 Toonies for Tummies campaign achieved a record number of sponsors (31) and had more than 1,400 participating retailers, which this year included FreshCo in Western Canada and Ontario, for the first time.

READ: With support from Empire, Toonies for Tummies expands East

Launched more than 20 years ago, the Toonies for Tummies program raises funds by asking grocery shoppers to donate $2 at store checkouts during the campaign. Donations can also be made online, year round.

While the Foundation is still tallying up how many dollars were raised this year, McKenna said they were on track to “comfortably exceed” the record $3.5 million raised in 2021. And because "it’s a collaboration between the retail partners and the CPGs, 100% of everything that the shopper donates—all of it will find its way to a local breakfast program,” said McKenna.