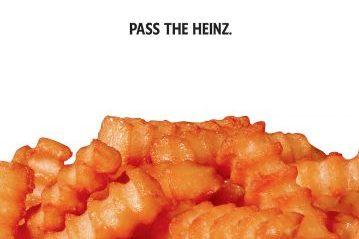 In a clever fusion of PR and advertising creative, Kraft Heinz garnered plenty of free publicity this week by running ads for Heinz ketchup originally “created” by Don Draper in Mad Men.

The ketchup brand (which has about 83% of the Canadian ketchup market, according to Euromonitor) is running the simple ads showing closeup photos of food favourites—burgers, fries and steak—with the tagline “Pass the Heinz.” The advertising concept was originally featured in a storyline of the ultra-popular show set in a New York ad agency in the ’60s.

In the season-six episode “To have and to hold,” Draper, the creative director of the fictitious agency Sterling Cooper Draper Pryce (SCDP) revealed the idea in a pitch to the Kraft ketchup client—the client called the original idea “bold,” but didn’t like that the bottle was absent and SCDP later lost the account.

Now, nearly identical ads are running in print and on outdoor billboards in New York only, but stories about the ads ran in major media outlets around the world.

Both Kraft Heinz and the brand’s real creative agency David playfully presented the stunt as the overdue embrace of a real idea from a real agency, decades ago.

“Heinz, a name that is synonymous with ketchup, and more recently mustard and BBQ sauce, selected the 'Pass the Heinz' campaign after an agency review because it is clever, modern and doesn’t require paragraphs of copy to convey what Heinz brings to the table,” stated a straight-up press release announcing the campaign.

Nicole Kulwicki, head of Heinz brands, said the tagline and creative idea was genuinely good and would resonate with consumers, even if they're unfamiliar with the show.

“You can be walking by the billboard and it’s still very powerful, even if you don’t understand the Mad Men connection,” she told Adweek. “Of course, we would love Mad Men fans to pick up on it, but we feel it works very well on its own, too.”

"Anytime a creative campaign can get people talking positively it is a win and this obviously got a lot of earned coverage,” said Justin Creally, co-founder of the Toronto-based communications and PR agency North Strategic.

“Imagine if they could have done it closer to the airing of the actual episode when Mad Men was generating so much conversation,” said Creally. “That would have been much bigger." (The episode aired in 2013.)

However, there might be other things they can do now to capitalize on the attention it is getting, especially if they can find some budget to get Jon Hamm, the actor who portrayed Draper, involved. “Maybe a 1960s price promotion, or win a burger and fries lunch with Jon Hamm.”