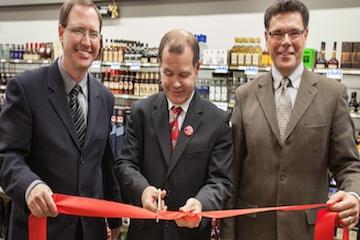 On December 6, the MLCC and Canada Safeway opened the province’s second Liquor Mart Express outlet at the Canada Safeway store on Pembina Highway in southeast Winnipeg.

When Canada Safeway first learned that the Manitoba Liquor Control Commission (MLCC) was contemplating a pilot project aimed at introducing its new Liquor Mart Express concept into Manitoba grocery stores, the national chain jumped at the opportunity to participate in the program.

The Liquor Mart Express store within a grocery store is a new model of convenience shopping in Manitoba.

“We thought that it would be a natural fit for us,” said John Graham, director of public affairs and government relations for Canada Safeway.  “We already sell liquor in many of our U.S. stores and we carry liquor in ten of our stores in Alberta.”

The concept was first announced in May 2011 by the Province of Manitoba as part of the New Hospitality Strategy. 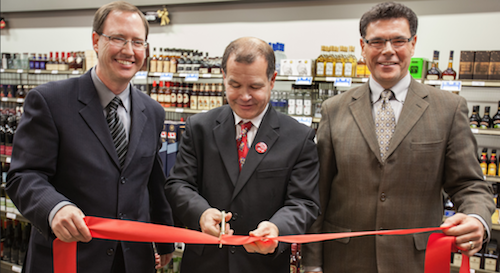 The Pembina Highway store was chosen, Graham said, because of a restriction that prevents the new Liquor Mart Express outlets from being located within 2 km of any current MLCC store.

“There is a strong correlation between Canada Safeway and MLCC locations,” Graham said.  “We often share the same malls.  The Safeway on Pembina Highway doesn’t have any liquor stores nearby.”

The new 755-square-foot Liquor Mart Express outlet is located right near one of the entrances to the store next to the customer service counter.  It features a selection of approximately 400 of the top-selling products consisting of popular wine, spirits and beer.

A third Liquor Mart Express location is anticipated to open in Brandon, Man., in 2013.

As a pilot project, the strategy allows for up to 10 Liquor Mart Expresslocations with up to five of the stores to be located within grocery stores.

In Ontario, Conservative leader Tim Hudak has questioned whether the province should allow beer, wine and spirits to be sold in corner stores and grocery aisles.

He saidthis week that Ontario should follow other Canadian and U.S. jurisdictions such as Alberta, British Columbia, West Virginia and Iowa, which allow the private sector to sell alcohol.
Advertisement
Advertisement