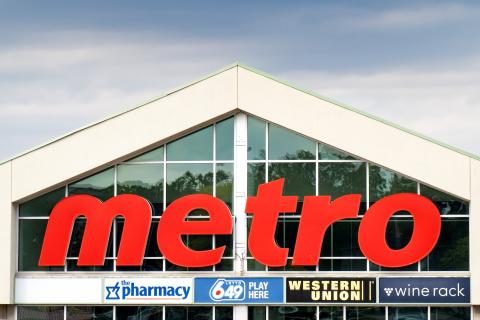 Metro is adding in-store audio advertising to 1,100 stores under its various grocery and pharmacy banners in Quebec and Ontario—including Metro, Metro Plus, Super C and Food Basics—thanks to a new partnership with Stingray Group’s Stingray Retail Media Network.

Stingray, which already provides the in-store music for Metro (as well as many major Canadian grocers), launched its media network in December, after spending approximately three-and-a-half years building the business.

“We needed to make sure that retailers were interested in leveraging the music we have in their stores to add advertising within that stream, and they were,” says Ryan Fuss, senior vice-president of Stingray Advertising. “Retailers are…differentiating themselves and generating healthy advertising businesses by giving brands access to their consumers while they shop in-store.

“Historically, it’s been really hard for brands to reach a shopper in an environment where they’re literally aisles away from their products,” he adds. “We’re democratizing access for brands in retail. If you’re a CPG brand looking to reach a consumer in a contextual environment, you now have a way to do that.”

In a digital ad world dominated by tech giants like Google and Facebook, Stingray enables retailers to offer brands an attractive alternative—access to a channel that directly reaches consumers at the point of purchase.

“[Retailers] are all looking for ways to thoughtfully introduce advertising within their brick-and-mortar locations, and our promise is that this will be really complementary to the shoppers’ experience,” he says.

It’s providing contextually relevant ads for brands that reach consumers as they shop, potentially helping retailer partners grow basket size. “[A customer] might be there with five things on their list, but not toilet paper. But if they hear from a brand telling them why they should go to the toilet paper aisle, there’s a good chance they might check it out,” he says.

Metro has long used its stores as an advertising delivery vehicle, including shelf advertising and loyalty promotions with various CPG companies, says its vice-president of marketing, Alain Tadros. The partnership with Stingray formalizes and commercials the in-store radio network to “integrate advertisements that will allow CPGs to reach more customers and increase conversion,” he says.

Tadros says it’s important to view this deal beyond any monetary implications. “With consumer habits changing, media proliferation and fragmentation of reach, the retail media network is a significant opportunity for brands to reach consumers near or at the point of decision, drive more conversion and better measure conversion than many other media venues,” he says. “This is a win for brands, a win for consumers, and a win for Metro.”

Stingray also announced an ad partnership with Dollarama late last year, and also launched advertising into 200 Walmart Canada stores in April (with the remaining stores launching in the second quarter). In January, it announced its intention to expand into the United States following the acquisition of InStore Audio Network, which reaches 100 million shoppers in over 16,000 grocery retailers and pharmacies each week, and generated approximately US$18.5 million in revenue in 2021.

Fuss says that after every song, Stingray’s music device will automatically ping the company’s ad server, giving it the capability to dynamically insert up to eight 15-second ads per hour (none of which will air back-to-back) into the in-store audio stream (hear examples that Stingray and Metro created for Post Cereals below). Tadros says the model continues to evolve, but Metro is offering brands category exclusive, geo- and time-targeted ads.

The company is also limiting the amount of advertising that consumers are exposed to during a shopping trip. “The intent is to drive better conversion while not disrupting the in-store customer experience,” he says. “This is something we will be monitoring closely and will adjust as needed.”