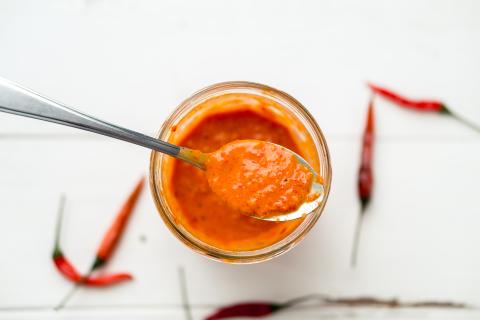 Whether it’s a rich pasta sauce for transforming leftovers into a delicious casserole or a spicy hot sauce for kicking up the flavour of a bland dish, sauces have the power to add extra oomph to our meals. With much cooking still being done at home, consumers are really pouring it on when it comes to sauces. According to research from Ipsos, sauce usage in home cooking is up by 22% compared to the pre-pandemic period, says Kathy Perrotta, vice-president of market strategy & understanding at Ipsos.

Indeed, NielsenIQ data for the past two years shows big sales jumps for sauces in Canada from September 2019 to September 2021—meat and seafood sauce sales rose 26% from $109 million to $138 million in that two-year period, for example, while Asian sauces rose 28% from $105 million to $135.5 million, and barbecue sauce sales grew 16% from $74 million to $86 million.

“Young millennial families are still a driving force, but we’ve started to see an elevated interest across many demographics,” says Kelsey McKitterick, category business manager, taste elevation, sauces and away-from-home at Kraft Heinz Canada, adding that the company’s sauce sales were on the rise even before the pandemic. “There has been heightened interest in cooking aids, with both sauces and condiment categories delivering the quick and convenient meal enhancement consumers are looking for during these at-home occasions,” she says. “The pandemic has amplified these sales trends, driving significant growth in the last 18 months.”

More good news, according to McKitterick, is that these strong sales are likely to continue. “Our insights suggest that even in a post-COVID world, a number of these at-home habits will end up continuing,” she says. “Traditional work routines are being disrupted by companies adopting a hybrid or full work-from-home model, resulting in a significant portion of these [eating] occasions continuing to occur within households.”

Perrotta suggests consumer desire for convenient ingredients like sauces is experiencing a resurgence as we settle into new daily routines that are equally as busy as our pre-pandemic ones. “We’ve seen an evolution from those early ‘staycation’ days,” she explains. “The quest for convenience remains as strong, if not stronger, than it did in the pre-pandemic time.”

In addition to convenience, Perrotta says many consumers turn to pre-made sauces because they provide reassurance that their home-cooked meals will turn out tasty. “It ensures the outcome might be better than if I scratch-cooked something,” she says. “The idea of ‘aided cooking’ is not just for time but also for results.”

Richa Gupta, founder of Good Food For Good, a brand specializing in better-for-you sauces, says this idea of creating fast, reliable meals is a big selling point for her customers. “The benefit of sauces is even if you don’t know how to cook things from scratch, they allow you to take those shortcuts but without compromising on quality,” she says.

Digs Dorfman, CEO of Toronto grocer The Sweet Potato, says simplifying cooking seems to be the driving force behind the store’s best-selling sauces. “For instance, we sell a lot of tamari, which most people don’t know how to make at home,” he says. “We also do a decent volume of ketchup and mustards, especially during the summer months, both of which [are sauces] people are unlikely to make at home.”

The pandemic has seen many consumers favouring familiar, staple sauces over more adventurous options. “Consumers have retreated from searching for the latest and greatest and retreated to comfort,” says Perrotta. She adds that home barbecuing saw an increase over the past year as part of this movement towards nostalgic fare, driving a corresponding rise in barbecue sauce sales.
“People went back to things that were on the decline,” she says. “Barbecue sauces and sauces for pasta, they all support that need or that quest for comfort and nostalgia.”

Jonathan Cho, senior brand manager for Conagra’s VH brand, says classics like plum sauce and teriyaki sauce continue to be among VH’s bestsellers. “The classics are classics for a reason,” he says.

That doesn’t mean, however, that innovation is absent in the world of sauces. “We’re seeing increased interest in spicy, rich, and creamy sauces,” says McKitterick. This year, Kraft Heinz also rolled out several fusion-style sauces that combine popular flavours including “hanch” (hot sauce and ranch), “tarchup” (tartar sauce and ketchup) and “wasabioli” (wasabi and garlic aioli), which McKitterick says were inspired by consumer suggestions posted online. “The Heinz ‘crowdsauced’ flavours are recent success stories that highlight the growing trends coming from outside the classic sauce offerings,” she says.

Adam Tully, senior director, food operations for Calgary Co-Op, is also seeing a trend around flavour mashups. “We have noticed different flavour profiles coming out and crossing over,” he says. “We’re seeing a crossover from habanero and sriracha into barbecue sauces .... [and] Frank’s hot sauce now has a line of dipping sauce.” 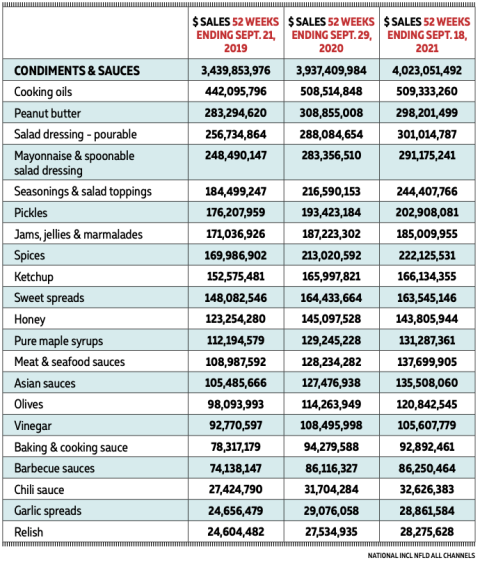 Perrotta says bulk sauces are becoming popular in some international markets, which also plays into this trend of mixing bestselling flavours. “You go to the store and pump your own [sauce], and it can be an interesting part of the experience to be able to construct your own personal sauces,” she says. Although the bulk sauce concept isn’t widespread in Canada yet, Perrotta says she could see this changing in the coming years. In addition to offering consumers a way to customize their sauces, the bulk model also uses refillable bottles, tapping into the growing demand for sustainable packaging options. “As we continue to see younger consumer cohorts [in particular] looking mindfully at things like recycling and single-serve plastic, it’s an interesting concept for sauces,” she says.

Hot sauce seems to be finding a sweet spot between old-school and new-school flavours. “Hot sauce is also on the increase and it has been on the rise for some time,” Perrotta explains. “That’s partly driven by that expanded global cuisine Canadians have at their fingertips based on our diverse cultural backgrounds, but it’s really more around spicing up the old favourites.”

Michael Burgess, founder of Nerpy’s Inc., says he’s seen a dramatic change in his consumer demographic since starting his hot sauce brand more than a decade ago. In the early days, he says most of his customers came from the West Indian community, but now his products are gaining traction with a much wider audience.

Burgess partly credits the web series Hot Ones for getting consumers interested in hot sauce. “It’s been a tremendous boost to the industry overall,” he says of the show. “I think that’s helped to drive some of the engagement at the consumer level, especially with a younger audience. They’ll go to the store and buy different hot sauces and then go home and do their own version of a hot wing challenge.”

Lorraine Hawley, chief production officer for Toronto’s Fresh City Farms, says sales of sauces are up overall at their stores, and hot sauce is particularly popular. She notes consumers seem to be shifting away from super spicy hot sauces and, instead, are showing more interest in unique flavours made with mushroom and fruit bases. “They’re a little more flavour-forward while still having the heat,” she says.

Beyond seeking great flavour, consumers are also looking for sauces that are locally made and promise better-for-you benefits. Nerpy’s products, for example, are free of artificial ingredients, as well as low in carbs, sugar and sodium. Burgess says the clean label and the brand’s location in Richmond Hill, Ont. (tapping into that “local” appeal) are both important to his customers. He notes that Nerpy’s One Drop Green Seasoning has found niche success with vegans and those with nut allergies due to its similarity to traditional pesto sauce—but minus the pine nuts and dairy.

The Good Food For Good brand was founded specifically with health-conscious sauce consumers in mind. The sauces are organic and made with no added sugar. “More and more people are trying to avoid added sugars—especially added hidden sugars,” explains Gupta. “And a serving of [traditional] barbecue sauce [sometimes] has more sugar than a doughnut.” Gupta says many of her customers follow keto, paleo, or whole 30 diets and are looking for flavour boosters for home cooking that also fit their needs. “When you’re trying to eat healthily, it becomes very challenging when you can’t add flavour because anything you see that adds [flavour] has things in it that you can’t eat,” she says.

Good Food For Good’s lineup already includes ketchup, barbecue sauces, and cooking sauces like tikka masala. Its most recent launch is a plant-based Bolognese sauce made with pumpkin seeds. “We use ground-up pumpkin seeds to give the mouthfeel of beef,” explains Gupta.

Perrotta recommends grocers consider consumers’ main motivations for purchasing sauces when strategizing their retail displays. “The sauce can be an afterthought, so it’s about being top-of- mind and having those cross-marketing initiatives to remind consumers of how they can flavour different things in different ways,” she says.

With COVID limiting in-store tastings of new sauces, Hawley says Fresh City Farms has seen success with re-merchandising more frequently to help catch the interest of customers. “As our repeat customers come back, they’re [at least] seeing new things without necessarily being able to taste them,” she says. “We’re moving things around and showing them at different eye levels in different spots in the store, and merchandising them with the things that they would go well with, whether it’s a chutney in the cheese fridge or a hot sauce near the entrees.”

Good Food For Good’s Gupta agrees the key to successful retail displays is playing up the convenience and versatility of cooking with sauces. “If [consumers] go to the store and they see things merchandised as a meal solution versus going to this aisle for this and that aisle for that, you might just make their lives much easier,” she says.