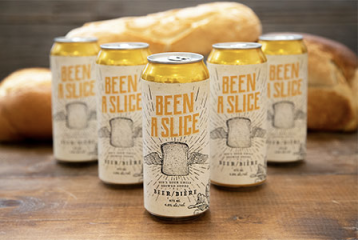 Second Harvest is aiming to generate buzz with a new beer made from bread.

The Toronto-based food rescue charitable organization is launching "Been a Slice," a limited-edition beer made from bread that’s approaching its best-before date. The idea is to show good food that’s unwanted can be repurposed instead of wasted.

A limited release of 500 cases will be available in select LCBO stores, The Beer Store and a number of Toronto bars and restaurants the first week in November. Proceeds from sales will go directly to Second Harvest.

According to Second Harvest, Canadians are among the world’s biggest wasters of food, with the average Canadian sending more than 396 kilograms of food to landfills each year. There, it decomposes and produces methane, a key contributor to global warming.

“We’re hoping to put the message out that food loss and waste is a serious problem,” says Lori Nikkel, CEO of Second Harvest. “Although we support a number of social service agencies, we’re also an environmental organization. And with the new IPCC report out , we need to start taking this seriously—that food loss and waste is having a significant and damaging impact on our environment. So this is one way to bring light to the subject and to use repurposed food in a fun, exciting way.”

Second Harvest worked with a number of pro bono partners on Been A Slice. Creative agency Bob’s Your Uncle developed the concept; Common Good Beer Co. is brewing the beer; Prairie Boy Bakery is supplying the bread; and Outfront Media is donating extensive outdoor billboard space in Toronto, including takeovers at Yonge-Dundas Square, Eglinton Square, and Yonge and Sheppard.

Been a Slice will also be promoted through PR, social media, POS in bars and restaurants, and a food and beer tasting event on Nov. 7 in Toronto.

Bob Froese, CEO of Bob’s Your Uncle, says the Been a Slice initiative aims to attract millennial influencers and donors. “Second Harvest has been around for a significant period of time and enjoys a very strong following amongst older populations,” he says. “But a lack of awareness is particularly prevalent amongst the younger generation.”

While Been a Slice is only available for a limited time, Second Harvest has launched a Kickstarter campaign to help bring it back to the shelves. “It’s a mechanism to further spread the message,” says Froese. “It’s also a way to generate ongoing interest, with the hope being that the interest and additional funds could support a second round, or ideally, even a continuous and ongoing production and sale of the beer.”

Second Harvest works across the supply chain—from farmer to retail—to capture surplus food before it ends up in the landfill. It then delivers that food to social service agencies in Toronto and food hubs across Ontario. Since 1985, Second Harvest has rescued more than 127 million pounds of edible food—mostly protein, dairy and produce—bound for landfills.