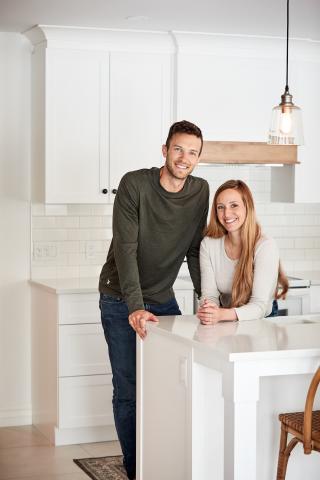 When Claudia Poulin switched to a plant-based diet, she started a morning routine of making smoothies for herself and her partner, Dominic Dubé. “They were very, very complex smoothies with 10 to 15 ingredients: superfoods, protein, veggies, fruits,” Dubé recalls. “At some point, we just had the idea of making it simpler by pre-making them in little cubes.” In the morning, Poulin and Dubé would pop the smoothie cubes in a shaker bottle or a mason jar, add plant-based milk or water, let the cubes melt, then shake it up.

The frozen cubes were only meant to make Poulin and Dubé’s mornings easier. But they saw the potential for others to benefit from their clever hack. They started a Facebook page in May 2015 to sell smoothie cubes to friends, neighbours and locals in Sherbrooke, Que., where they were based. At the time, Poulin was pursuing a master’s degree in psychoeducation while Dubé had just finished a degree in mechanical engineering. Neither had intended to start a food business, but Dubé jumped in full-time to handle production and delivery. By the fall of 2015, they landed their first grocery client—a small independent market in Sherbrooke. Recognizing the opportunity to expand into more grocery stores, Poulin decided not to return to school, meaning they were both all-in on Evive.

The risk they took paid off. By mid-2016, Evive had about 25 grocery stores on board to sell their smoothie cubes and Poulin and Dubé had raised $200,000 from angel investors to buy more inventory, hire employees and scale up their operations. But Evive’s growth also came with its hurdles. Previously, Dubé was cutting slabs of frozen smoothie into cubes with a knife, but the technique was causing repeated injury to his wrists. They worked with a manufacturer to build a cutting machine, investing significant funds in its development, but the machine didn’t work. “We really [hit] a wall of ‘I don’t think we should continue doing this,” Dubé recalls. “We thought there was no way to scale it, and I was feeling tired.”

The failure of the cutting machine led Dubé and Poulin to develop a better solution—recyclable trays that are easy to fill and dispense. It was a turning point for the company’s growth and expansion. By the end of 2016, Evive’s smoothie trays were available in 120 stores in Quebec. In 2017, they launched in Ontario and hired their first employee. A year later, Dubé and Poulin got the chance to debut their product on Dragons’ Den, which brought lots of new traffic to their e-commerce store that launched in January 2018.

Evive’s product lineup expanded around this time as well, growing from three core smoothie flavours to seven in total. A protein smoothie line was added in 2019. And in that same year, Dubé and Poulin attended a pivotal trade show in Ontario hosted by the Canadian Health Food Association. “We had an amazing reception and got confirmed to be in Farm Boy, Longo’s, and so many other natural food stores,” Dubé says. “It is, to this day, one of the best memories for Claudia and me.”

Evive had just launched a line of frozen curries, sold in their signature trays, when the pandemic hit. But this didn’t slow Poulin and Dubé down. Grocery store sales were steady, and e-commerce grew with the demand for home delivery. They delayed their e-commerce launch into the U.S. market from March to August 2020. By March 2021, they made their U.S. retail debut, mostly in small chains of natural, independent grocers. They’re now available in 500 stores in the United States, mostly in the northeastern part of the country, in addition to 1,500 stores in Canada. Evive currently has 50 full-time staff helping to run the business.

This year, Dubé and Poulin have plans to relaunch their frozen curries as meal kits, pairing the cubes with a side, like rice or quinoa. In May, Evive will also debut a new lineup of plant-based muffin bites—frozen cubes of dough that can be baked anytime.

Dubé and Poulin had never planned to open a food business, but they’re both incredibly excited about what they’ve grown and the positive impact their products have. “Evive is about fuelling people’s well-being,” says Poulin. “For me, discovering my well-being started with eating healthy. [It] had a tremendous effect on me, mentally and physically, which was really fantastic. I wanted to share that with the rest of the world."

This article appeared in the May issue of Canadian Grocer