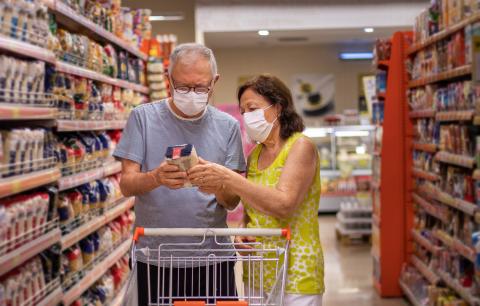 As several prominent U.K. grocery chains including Waitrose, Morrisons and Tesco plan a total or partial elimination of “best before” dates on perishable items, instead urging shoppers to use their best judgement, a new study suggests Canadian shoppers would be reluctant to see them phased out.

Conducted by the Agri-Food Analytics Lab at Dalhousie University in partnership with Angus Reid, the study of 1,508 Canadians found that only about one-quarter of respondents (27%) support eliminating best before dates from grocery items.

“There is no appetite for the elimination of best before dates in Canada,” Agri-Food Analytics Lab director Sylvain Charlebois tells Canadian Grocer. “I think we’re addicted to best before dates.”

And while health and safety is paramount, there might also be a financial incentive for Canadians to want best before dates to stick around. “Those ‘enjoy tonight’ deals [in which stores sell food items at or near their best before date at a significant discount] might not be available if you didn’t have best before dates,” he says.

In Canada, only items with an anticipated shelf life of 90 days or less are required to carry a best before sticker. However, the Canadian Food Inspection Agency also says that an item past its best before date is not unsafe for consumption.

Instead, best before dates are merely an indication that a product purchased before that date will be in its finest form, retaining optimal freshness, taste, nutritional value or any other qualities claimed by a manufacturer. “It doesn’t actually mean it’s bad after,” Charlebois says. “It boils down to how people want to manage risk.”

The study also suggests that best before dates play an outsized role in how Canadians perceive the freshness of a product. When asked the main signs they would look for in order to determine if a product was expired, 25% of respondents said a best before sticker, second only to the presence of mold (28%).

On the other hand, 65% of respondents indicated that they have thrown out unopened food because its “best before” date had passed, which food rescue organizations like Second Harvest say is a major contributor to Canada’s food waste problem.

Research has shown that close to 60% of the food produced in Canada, the equivalent of 35.5 million tonnes, is lost or wasted annually. In a recent column for Postmedia, Second Harvest CEO Lori Nikkel argued that best before dates are a “significant driver” of avoidable food loss, with consumers interpreting “best before” as “bad after.”

One of the challenges around best before dates, she said, is that they are suggested by the companies that manufacture the products, which opens up a potential for abuse through unnecessarily conservative best before dates.

“It’s like planned obsolescence from a manufacturer’s perspective,” says Charlebois. In other words, a term typically associated with companies like Apple or even BlackBerry could be applied to, well, apples and blackberries.