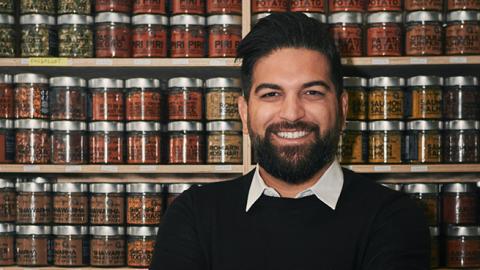 Ayman Saifi’s roots in the spice industry go back more than a hundred years. “I’m a fourth-generation spice merchant,” Saifi explains. “We’ve been trading spices since my great-grandpa, Husni, started the business in Palestine in the early 1900s.”

From there, Saifi’s grandfather and father expanded the business, shifting from Palestine to Jordan in the 1970s and 1980s and, ultimately, relocating their operations to Quebec in 1999.

While completing his university studies in the late 2000s, Saifi worked for his father’s business as a sales representative. At the time, the company focused mostly on the distribution of imported finished goods, such as rice and dry legumes, while a third of the business was spices. “Our customer base was mostly regional,” he explains. “Butchers, retail stores, a few restaurants and independent mom-and-pop shops.”

A decade later (in 2013) Saifi’s parents made the decision to retire to Dubai, leaving Saifi to take over operations. “I helped build the business alongside my dad and he had full trust in me,” he says. At the same time, however, Saifi was losing his spark for sales. “I felt like something had to change because we had hit a plateau,” he explains. He wanted to pivot, but he wasn’t sure how to do it.

A few years later, the inspiration for change came from Saifi’s own kitchen, where he often experimented by making different spice blends. “I made tacos one time using my own spice blend,” he recalls. “I invited my neighbours for dinner and they were like, ‘They’re so good’ and wanted to know how I made them. I thought to myself: ‘I need to put this blend together and sell it as a finished product’.”

From there, Saifi went on to develop about a dozen spice blends, ranging from a steak spice to Thai-inspired combinations and a za’atar similar to his mother’s. He would test early recipes out on friends (“a lot of my neighbours were my guinea pigs”) and gave samples out to his team of eight employees to test in their home kitchens.

After naming his new company A Spice Affair –“I wanted the brand to represent the love affair that people have with food and their kitchens” – his next task was finding retailers to list his products. Saifi’s first big account, and a validating achievement for the entrepreneur, was getting Winners on board in October 2016, just a few months prior to A Spice Affair’s official launch. “I actually pitched Winners before I had a finished product ready,” Saifi recalls. “I got a few jars and labels printed out from a regular printer. They looked really bad.” Nevertheless, the Winners buyer believed in Saifi’s product and agreed to stock A Spice Affair in more than 400 stores nationally. “The first time I saw it on the shelves of Winners was through a picture sent to me by a friend who lives in Toronto,” he explains. “It was a very humbling feeling. It gave me a huge sense of pride.”

From there, Saifi continued to seek out more distributors. His next big milestone came in 2018 when HomeGoods, a home decor retailer in the United States, came on board. A year later, A Spice Affair broke into the grocery retail market with Sobeys locations in Quebec. Saifi was just beginning to make further moves in grocery when the pandemic hit.

“It was actually a very scary few weeks,” he recalls. But Saifi persevered and focused efforts on increasing his grocery representation, along with pushing direct-to-consumer online orders. “We saw a 2,000% jump in e-commerce sales,” he says. “That was an incredible feat.”

A Spice Affair’s e-commerce growth caught the attention of a distributor in Ontario, who Saifi has since partnered with to gain contracts at Loblaws stores in the province. Saifi also grew his grocery reach in Quebec, working with Metro to develop a French sister brand called Passion d’épices.

And this year, Saifi brought A Spice Affair into more international markets – his former home country of Jordan. There, he secured his first celebrity partnership with renowned Jordanian chef Deema Hajjawi. “She fell in love with the brand,” Saifi says. “We did a collaboration and developed four custom blends that were her recipes.”

Today, A Spice Affair and Passion d’épices can be found in more than 1,000 stores in Canada. And Saifi has no intentions to slow down. Next year, he plans to enter the United Arab Emirates and introduce products such as infused maple syrups – his first venture outside of dry spices. “We’re working on a smoky jalapeño maple syrup and a maple pepper syrup,” he says.

Looking back at his family’s legacy, Saifi thinks his great-grandfather, who used to trade spices and goods by the boatload, might be surprised at the direction that Saifi has taken – but he’d still be proud. “Today, we’re selling [spices] in 100-gram jars, mixing and matching them,” Saifi says. “I see this as more of an art versus a trade. Their trade was an art in its own form. And today, we’re taking that and turning it into an art that people can enjoy.”