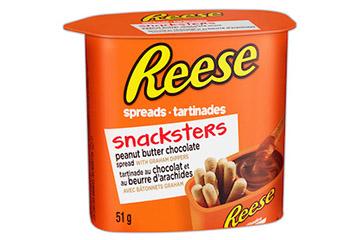 Hershey Canada is about to go “Cocoa-E-Cocoa” with the king of Canada’s $73-million chocolate spreads category–Nutella–with the launch of Reese Spreads.

The new product, which offers the flavour of Reese Peanut Butter Cups in spreadable form, launched in the U.S. in November, but was delayed in Canada after consumer research found value-conscious Canadian shoppers preferred a larger size jar.

Reese Spreads is sold in a 368-gram jar in the U.S., compared to a 650g jar that sells for $6.79 in Canada. The spread is also available in the Snacksters product, a checkout item introduced in April that features a single serving of Reese Spreads combined with graham cookie dippers.

READ: Nutella and Tim Hortons get in spread with new deal

The delay led Canadian shoppers keen to sample the product to petition Hershey to introduce Reese Spreads in Canada; chains like Safeway Canada even lobbied its customers to contact Hershey to enquire about the product.

According to Nieslen, Reese is the leading chocolate brand in Canada across all segments. In the single bar category, Reese’s Peanut Butter Cups recently overtook Cadbury Adams’ Caramilk to become the country’s second most popular bar, just behind Nestlé’s Kit Kat.

The Reese brand portfolio features approximately 43 items, including 19 everyday products and 24 seasonal items, plus three or four Halloween-themed products. The last big innovation was Reese Sticks, which launched in King Size and a Minis Pouch in 2012, followed by singles in 2013 and multi-pack in 2014.

“We’ve been seeing some incredible growth on the Reese’s portfolio,” said Grosberg. “We know the power of the Reese brand in Canada, and we wanted to leverage that to make our foray into a new aisle.”

Grosberg said that Reese Spreads will appeal to so-called “Reese loyalists” who were not previously served by the spreads category. Kraft Canada does offer a chocolate-flavoured peanut butter, but it is not considered a sweet spread.

Grosberg said that there is an opportunity for Reese Spreads to become a “snack transformer” that can accompany items such as fruit or pretzels. She said that it could help increase basket size at retail, as customers purchase items to accompany the product.

The product launch is being supported by a new marketing campaign, featuring the tagline “Do you spoon.” As part of the campaign, Hershey’s social and experiential agency Community set up a “talking” Reese Spreads vending machine in Toronto’s west end that invited passers-by to “spoon” with an oversized spoon next to the machine in order to get a free sample.

The brand’s social activity is being supported by out-of-home advertising in three major markets (Vancouver, Calgary and Toronto) with a second wave debuting in the back-to-school period, when it will be accompanied by TV.

“We know how much pent-up demand there is for the product, so we want to continue to build that excitement,” said Grosberg.