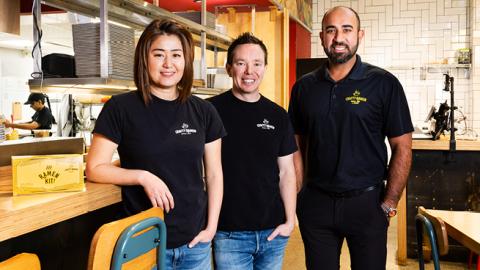 When Miki Ferrall and her husband Jared moved from Japan (where Miki is from) to Guelph, Ont. (where Jared is from) in 2016, Miki felt a longing for her home country – the food especially.

“Ramen is one of those comfort foods that we both really love,” Miki says. But there were no ramen shops in Guelph at the time. Jared has a culinary background (he’s a Red Seal-certified chef who has worked in high-end restaurants in Canada and Japan), so it was a natural fit for the couple to open a ramen restaurant. Jared would be in charge of the kitchen, while Miki would manage the front-of-house operations. Crafty Ramen opened in downtown Guelph in 2017, 10 minutes away from where Khalil Khamis lived.

At the time, Khamis had been operating five Harvey’s and Swiss Chalet franchise restaurants with his family in the Guelph and Kitchener-Waterloo areas. Aside from being a fan of the restaurant himself, he saw the potential of Crafty Ramen. “I thought they did an incredible job with the restaurant,” Khamis explains. “I was like, ‘Hey, I’m passionate about food and I know the restaurant world. We should partner.’” By November 2019, the trio opened a second Crafty Ramen location in Kitchener with a longer-term vision to open five restaurants in five years.

Then, just a few months later, COVID19 hit. “Survival mode started to kick in,” Khamis recalls. “We thought about what we could do to generate revenue and bring our Crafty Ramen experience to customers.”

By mid-April 2020, the trio had developed a ramen meal kit that customers could prepare at home. The kit included everything – a protein, broth, noodles and toppings – customers would need to make a bowl of ramen in their own kitchens. It would be the first ramen meal-kit subscription the trio knew of, and within weeks the kits were selling out in minutes. “We started to get people messaging us from all over the country asking us to ship it to them,” Jared recalls. So, in December 2020, the company launched an e-commerce platform to service more parts of Ontario, including Ottawa, Kingston, the Muskokas and the Greater Toronto Area. At the same time, the team also launched its own chili oil called Szechuan Tears.

It was in January 2021 that independent grocery stores began calling. “They were reaching out and saying, ‘Hey, this is cool. Nobody’s doing this. We’d love to sell your product’,” Khamis explains. But selling in grocery stores required the team to reformulate their kit to have a longer shelf life. The solution was to develop a frozen kit instead, which would also allow it to be shipped and sold further afield while still maintaining quality.

Recognizing the potential for their grocery and e-commerce businesses to grow even larger, the trio then raised $3.5 million from a group of investors in Toronto. “It was a pretty incredible feat,” Jared recalls. “We had an idea and we got validation from the investor community to help us grow.”

Growing is what they did. In November 2021, they opened a production facility in Waterloo. Then, in the following summer, Crafty Ramen brought on a sales partner that got their noodles and chili oil on the shelves of six Whole Foods Market locations in Ontario, as well as a handful of independent Loblaws and Foodland stores in the province. By October of this year, the trio appeared in an episode of Dragons’ Den, landing a $600,000-deal with Arlene Dickinson for a 12% stake in the company. In that same month, Crafty Ramen began shipping kits to Vancouver and cities in the Lower Mainland of British Columbia.

The company now employs about 30 staff between its two restaurants, plus 25 people at its Waterloo production facility, and five office and operations staff. Crafty Ramen’s kits and products can now be found in more than 100 grocery stores, mostly in Ontario. And the trio shows no signs of slowing down. They’re currently in talks to partner with a national distributor who would bring Crafty Ramen’s products into grocery stores across Canada. They’re also launching a ready-made “heat and eat” option in 2023. “This one is for the super convenience-focused customer who doesn’t necessarily have time for the meal-kit experience, but still wants high-quality, restaurant-style ramen at home,” Khamis explains. Another restaurant opening is in the works for 2023, in Toronto.

Looking back at their journey, Miki says being part of Crafty Ramen has made Canada feel more like home. “One day, I want to see a Crafty Ramen restaurant in the Toronto airport,” she says. “So, when I go to Japan, I go home. And when I arrive back in Canada, I can have ramen and feel like I’m home, too.”