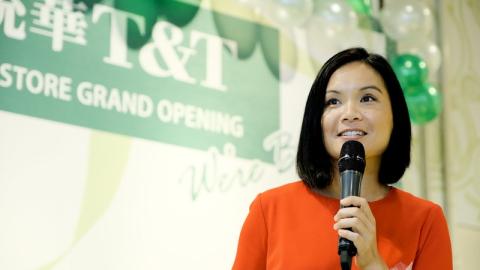 T&T Supermarketannounced on Thursday it plans to open its first Quebec store on the Island of Montreal sometime within the next 12 to 24 months. The country’s largest Asian supermarket chain is “on a roll” says CEO Tina Lee.

Canadian Grocer caught up with Lee to ask why T&T is turning its attention to Quebec now, what the rollout will look like, and what’s next for the specialty banner. “I would say we’re growing at a fast clip these days,” she says.

Why is T&T entering the Quebec market now?

Robert Sawyer [chief operating officer with parent company Loblaw Companies Ltd.] had a lot to do with it. He lives in Montreal, and since joining the team he has come to know more about our business and loves it. He’s a very big driver [of the decision] and gives me more confidence that T&T can be successful in Montreal.

I’ve only visited Montreal a few times, and more often recently in order to make this decision, and I’ve really grown to admire the culture. They love and enjoy food. It’s part of French heritage to enjoy every bite of food. They love to explore different flavours, and T&T should be part of that food ecosystem.

We continue to have a lot of growth opportunities in the provinces in which we operate, and Loblaw has a good team on the ground in Quebec, so they’ve been very supportive in helping us take this big step. With Robert’s encouragement, this is why now is the time.

Had Montreal been on your radar prior to Robert’s arrival?

It’s a very specific market…and we have to do more preparation to enter the province. We have a heightened awareness of that.

Before that, we’d been focusing on the other three provinces in which we operate [B.C., Alberta and Ontario] to maximize our growth there. It’s easier and faster to grow our footprint [in those markets] but now we have a solid foundation and we're ready to take that next step into the next province. While there are additional processes [required] to break through in Quebec, I’m confident it’s going to be worth it.

If you were to go to our store in Ottawa, you would see a decent amount of Quebec license plates on the weekends. In the summer, we would get a tour bus every Saturday from Montreal with 50 people on board and coolers under their seat. They would go and see the tulips or the [House of Commons] and their last stop on the way back to Montreal would be T&T. We see the demand and have more confidence we can figure out the operational steps [required] to enter the new province.

Other than language, are there cultural differences you have to account for. Do you anticipate it’s going to be radically different to other store openings in the country?

I hope not. If T&T sticks to what we do best, I’m hoping the people of Montreal will come and enjoy exactly that. For us, the biggest piece we have to get right is the language. I’m not coming into Montreal with a store selling local cheese and wine. That’s not our forte. It's to bring an Asian flair to the eclectic smorgasbord of Montrealers, which is what we do best, I think they’ll enjoy that. 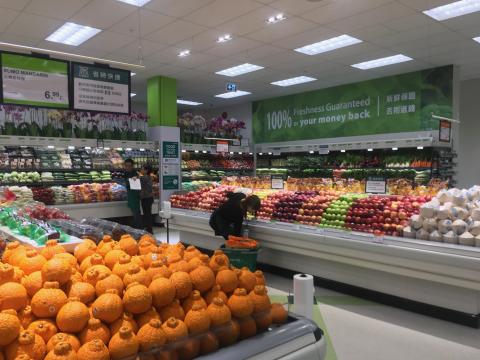 T&T's produce section at its store in Richmond, B.C.

Do you anticipate that your product assortment will be different in any way, or will it mirror that of other T&T locations?

It will largely mirror that of our other stores. But, the reason [we’re announcing this now] is…to open up the channel for local vendors.

Is this approach typical in other markets?

This is different. T&T stores are, in my view, quite complex and it takes time for a new department head or supervisor to learn the ropes and execute our business model. We think it’s going to take more than a year to train someone who doesn’t have any T&T experience to be able to efficiently manage a part of our store.

In Ontario, we don’t need to do that because we can transfer talent from other stores. Quebec is a new province, and we want to be able to hire French speakers. That’s the reason why we’re coming out early, to do recruiting and vendor outreach, even before we are announcing the exact location. We want to make sure the service offering is the best it can possibly be.

You’ve given yourself a bit of a window by saying you hope to open in Montreal within 12 to 24 months. Presumably you’d like to accomplish something on the shorter end of that timetable?

Of course we’d rather open earlier than later, but it all depends on our team’s readiness and recruiting efforts. I really think it’s important to settle the team first, and then we can try to pace our actual opening based on the talent we’ve found and operating a solid store.

Can you talk a little bit about your growth strategy and where you’d like to be let’s say five years from now?

T&T is very opportunistic when it comes to locations—we evaluate each on their own merit as they come up. We’ll grow as the right locations come up. I’m really happy and proud of the team we’ve built, especially over these last couple of tough years. I think we’ve built a solid foundation, enough to position us for growth.

We have the confidence to step into mall locations, where traditionally supermarkets haven’t seen success. Fairview Mall is the most recent announcement, but in October we opened in Willowbrook Shopping Centre in Langley, B.C. We are at Promenade Mall in Thornhill, Ont., we’re in Metro Town Mall in Burnaby, B.C., we’re in West Edmonton Mall, we’re in Lansdowne Centre in Richmond, B.C., so we have a successful track record where we feel there is still a lot of runway for growth for our model. That would likely make us one of the faster growing banners in the country.

We are announcing today our first store in Montreal. Depending on whether the community likes it or not will define how many more stores we can open. I have no idea whether the people of Montreal will actually like what we do, and if they do, there’ll probably be more opportunities.

But haven’t you proven your model at this point? Surely you wouldn’t be doing this if there was a fear of failing.

The best approach for Quebec is a humble one. I do not understand that province very well, so I approach it with some excitement, but also an eager and willing attitude to learn.

Beyond Quebec, are you contemplating expanding further Eastward?

The opportunity East of Quebec has not presented itself. I haven’t spent too much time [thinking about] East of Quebec, because it’s already a pretty tough nut to crack. What you can see…is that T&T is on a roll. I would say we’re growing at a fast clip these days.