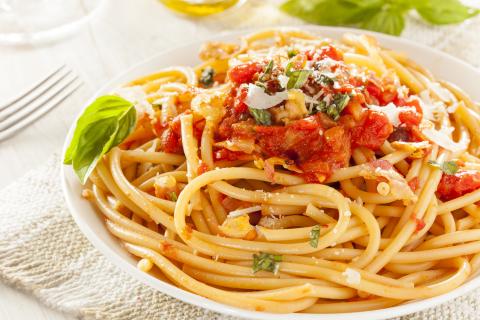 “[In the early part of the pandemic], everyone was stocking up on shelf-stable, emergency foods and pasta really benefited from that,” says Melanie Bartelme, global food analyst at market research firm Mintel. Gino Rulli, general manager at Barilla Group Canada, adds that pasta’s affordability continues to make it an appealing choice for consumers who may have struggled financially over the past year. “It’s a very economical meal for a family,” he says.

Pasta sales also seem to have benefited from more in-home cooking during COVID. “It’s so versatile you can just really do anything with it,” says Bartelme. Some grocers say the rise of in-home cooking is also fuelling consumer interest in new styles of pasta. “We saw an increase in people looking for less ‘traditional’ types of pasta,” says Bethany Roberts, category manager at Colemans in Newfoundland. “With more home cooks experimenting, there was an increased interest in orzo and bucatini, for example.”

Mintel’s Bartelme says specialty styles like bronze-cut pasta are also becoming more popular. “It has a hardier exterior that’s got more texture so it holds the sauce better,” she says of bronze-cut pasta. “This is still a premium feature, but it’s something that we’re seeing more regularly.” Angelo Boras, vice-president of sales at Italpasta, says sales of the brand’s Italpasta Artisan pasta, which is extruded through traditional bronze dies, have doubled over the past year. Similarly, Nico Dagnino, managing director of Eataly Canada, says that Pasta di Gragnano IGP—an air-dried, bronze-extruded pasta—is currently a bestseller.

Meanwhile, pasta made from alternative grains is capturing the attention of consumers looking for better-for-you options, and Rulli says Barilla has noted a growing interest in gluten-free pasta. The brand acquired Catelli Pasta in early 2021, expanding its portfolio to include a number of health-conscious products, such as the SuperGreens line, which is made with dried vegetables.

“More people are interested in specific diets, such as keto, or functional foods, and they’re interested in pastas that fit into those categories,” says Colemans’ Roberts, noting that its stores now carry pasta brands like Chickapea (made from chickpeas and lentils) and Rizopia (made from whole grain brown rice).

“More and more consumers are wanting to include plant-based products into their diets but they want items that are accessible and recognizable to them,” adds Victoria Watts, president and CEO of Pasta Tavola. The brand, which focuses on frozen ravioli made without additives or preservatives, recently launched a line that’s vegan, plant-based and non-GMO.

While interest in alternative pasta is certainly growing, the classics continue to be the top sales performers. “There are over 300 SKUs in the dry pasta category, but 10% of that really makes up 80% of the volume,” explains Barilla’s Rulli. “It goes back to what people are familiar with. The top 10 SKUs tend to be spaghetti, macaroni, lasagna, penne, etc.”

Bartelme says Mintel’s research indicates there is often a discrepancy between the pasta types consumers report wanting and what they actually buy. “People say whole wheat and fibre and all these health attributes are really important to their pasta purchasing, but then when you look at the percentage of people who say that they [actually] eat whole wheat pasta or whole grain pasta, it’s so low,” she says. ”It seems like people have an idealized version of what they should be doing.”

Barilla’s Rulli suggests the sheer number of pasta types to choose from can sometimes deter consumers from branching out beyond their favourites. “I think people try to navigate and explore, and they get a little bit confused and then they revert back to habits and buy what they would normally buy,” he says. Streamlined displays are, therefore, key to merchandising pasta, particularly when introducing new types to consumers. “Specific to the primary shelf area, I think that working to bring simplicity—fewer brands, meaningful brands in the category—will go a long way,” says Rulli.

Adding secondary displays and pairing pasta with complementary items is also key, says Italpasta’s Boras. “We analyzed a recent off-shelf program and found that when the participating retailer added off-shelf displays, store sales increased by 105% over sales at stores without the off-shelf displays,” he says. “Examples include creating a ‘pasta night’ display by merchandising the complete meal solution in one display.”