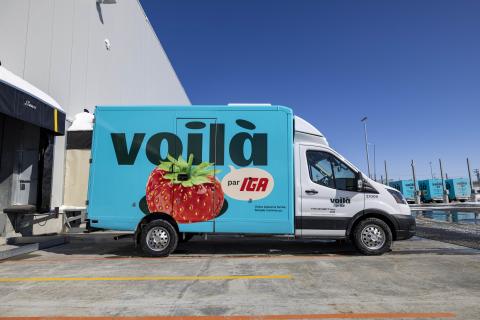 Voilà par IGA is ramping up service in Quebec.

Following its launch in the province March 7, the service is rolling out to more than 100 municipalities from Gatineau to Montreal to Quebec City. It replaces the existing IGA.net grocery delivery service.

Empire Company Limited had been testing the service among employees, before recently transitioning customers over to the new service, CFO Matt Reindel told analysts during the company’s third-quarter earnings call earlier this month.

“The feedback from the employee testing and our initial customers is fantastic,” he said. “They're off to a really strong start.”

A phased rollout is planned in the province and Reindel said he expected Voilà par IGA would be available to approximately 85% of the Quebec population by the summer.

Customers can order online or by downloading the Voilà mobile app. Orders are filled at Empire’s customer fulfillment centre (CFC) in Pointe-Claire, Que., which is the company’s second grocery e-commerce facility behind its CFC in Vaughan, Ont.

Empire launched its grocery delivery service in June 2020, servicing customers in the Greater Toronto Area. Construction is currently underway on CFCs in Calgary (2023) and B.C. (2025).