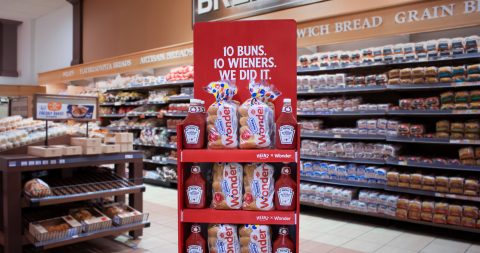 Hot dog! There is finally a (temporary) solution to the decades-old problem of there being more wieners than buns in their respective packaging. In time for National Hot Dog Month, bread brand Wonder introduced limited-edition 10 packs of its hot dog buns

It comes in response to Heinz Ketchup’s 2021 “Heinz Hot Dog Pact,” which invited Canada’s “Big Bun” and “Big Wiener” companies to come up with a solution to the longstanding problem (Wonder sliced bread probably provided an ad hoc solution on many an occasion).

Wonder introduced the new 10-packs of buns in Ontario on June 23. They’re being sold at Loblaws, Shoppers Drug Mart, No Frills, Real Canadian Superstore, Your Independent Grocer, Dollarama, Valu-mart and Fortinos stores. Each pack carries a label identifying Wonder as a proud supporter of the Heinz Hot Dog Pact.

More than 34,000 people have signed a Change.org petition imploring bun and wiener companies to come to a resolution over the age-old imbalance between dogs and buns. Kelly Backer, head of brand and category development with Wonder parent Wonderbrands in Toronto, says the number was simply too high for the company to ignore (it probably also knows a good marketing opportunity when it sees one).

“With many of our fans speaking up about this issue, we saw this as an opportunity for Wonder to partner with our friends at Heinz and finally give hot dog fans what they’ve longed for,” she said. “We’re thrilled to be able to partner and help solve a serious consumer tension.”

Backer declined to share details about how Wonderbrands was able to launch the new pack size, but says the effort involved a cross-functional team including product development/operations and procurement. Together they worked to ensure the 10-packs were seamlessly incorporated into the production process, and that packaging arrived on time despite long supply chain lead times.

Heinz is touting its role in (temporarily) ending the standoff with a series of social and out-of-home ads featuring headlines like “The end of uneven packs is here” and “We made hot dog history.” There are also in-store displays of Heinz Ketchup and the 10-packs bearing the message “10 buns. 10 wieners. We did it.”