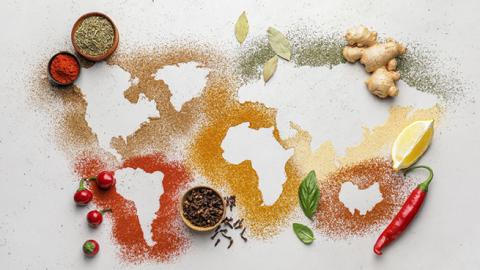 When it comes to the foods and flavours consumers are seeking, the world is their oyster.

Globally, the ethnic foods market is projected to grow from US$49 billion in 2021 to US$98 billion in 2028, growing a staggering 10.33% annually, according to Fortune Business Insights. The market research firm notes Asian cuisine will dominate the segment, with rising exports of Asian products such as Japanese, Thai, Chinese, Indian and Vietnamese. Increased consumer spending, rising immigration and demand for ready-to-eat food products are all expected to boost sales in the sector.

While those stats are a few years old, they have a long shelf life. “A lot of the data is not going to have changed since 2019,” says Joel Gregoire, associate director, food and drink at Mintel. “It takes time for consumer behaviours to really change.”

What has changed over the years is that international foods "have gone from being a nice-to-have to a need-to-have for grocers in a lot of cases,” adds Gregoire. In fact, 56% of Canadians agree grocery stores that don’t offer internationally inspired foods are not keeping up with the times. And 45% say they’re more likely to shop at grocery stores that offer these foods.

Given Canada’s immigration trends, the appetite for diverse foods will only grow. According to Statistics Canada’s population projections, immigrants could represent from 29% to 34% of the total population by 2041. Asia, including the Middle East, remained the continent of birth for most recent immigrants (62%), and almost one in five were born in India.

“Growth [in the grocery sector] is going to come from diverse Canadian ethnic groups, which will define and shape [food products] and merchandising decisions in stores,” says Amar Singh, senior director at Kantar. “That’s something retailers have to start thinking about right now ... The new demographic mix is going to be very non-mainstream Canadian, so it’s important to cater to their taste palates, dietary restrictions and sensitivities.”

Nature’s Emporium, which has four stores in the Greater Toronto Area, is among the retailers catering to both diverse populations and Canadians who are open to trying new-to-them foods.

“Nature’s Emporium has locations in communities with diverse populations, so there is a need from our customer base to provide healthy, natural and organic options that can help them create a wide array of culturally-inspired dishes,” says Terry Samaroo, director of grocery at Nature’s Emporium. At the same time, “Western tastes have shifted to become more diverse and inclusive.”

Mike Longo, chief merchandising officer at Longo’s, is also seeing an interest in cooking different global cuisines at home. “[Our guests] are excited to experience cultures in different ways by trying new products and discovering new flavours,” he says. “[They] tell us that one of the best ways to tap into global foods is by cooking them at home. Utilizing our heritage as an example, we have curated a line of Italian imports, Longo’s Curato, which features a lineup of authentic premium products.” Products in the Curato line include dry-cured meats, dried pasta, pasta sauce and gelato sorbet.

While many consumers want to try global cuisines at home, not everyone wants to prepare these dishes themselves. Shivani Dhamija, founder of Halifax-based Shivani’s Kitchen, says with people heading back to the office post-pandemic, they’re once again looking for convenience. The company, which started with selling ethnic spice blends and ready-to-use sauces, is now getting in the market of ready-to-eat meals in microwavable, recyclable containers. Three varieties recently launched: Butter chicken and rice, chicken curry and rice, and chickpea curry and rice.

“Now, people want to go out to eat but, with increasing prices and salaries not increasing, they’re looking for cheaper solutions,” says Dhamija. “That’s where we come in: Helping people get the same authentic flavours without being heavy on their pocketbooks.”

Convenience is also a focus at Lola’s Food, a Latin food company based in Mississauga, Ont. that offers fresh, locally produced products that are ready-to-heat at home in the oven or air fryer.

Rakesh Sharma, is managing director of Mississauga, Ont.-based PTI Foods, an importer and manufacturer specializing in South Asian foods. The company is seeing growth in the authentic flavours and products newer Canadians enjoyed in their home countries. “They’re not really [widely] known, but there’s huge demand for these products,” says Sharma. These products include jaggery, a type of unrefined sugar made from sugar cane juice or palm sap; atta flour, which is used to make flatbreads such as chapati; and ghee, a type of clarified butter.

Asha Wheeldon, founder and CEO of Kula Foods – a Vancouver-based company offering a variety of Afro-vegan foods – says she’s seeing a growing demand for gluten-free and flavourful meat alternatives. The company recently launched Ginger Beef – a versatile base for a variety of meals – and G.O.A.T Curry, which was inspired by the traditional Caribbean classic.

“High in protein, and packed with flavour, we’re making culturally diverse plant-based nourishment accessible for everyone,” says Wheeldon. “Our sauces and meat alternatives are gluten and soy free, made with Canadian-grown pea protein, whole ingredients and contain no added sugars or artificial sweeteners.”

With the proliferation of global foods, the question for retailers is how to effectively merchandise them. At Longo’s, merchandising is done by product type and not by international region, incorporating global products throughout the store. “As an example, all of our noodles and sauces are merchandised together so our guests have access to what they are looking for, but also an opportunity to discover other items they may not have been aware of,” explains Longo.

The key for grocers, says Kantar’s Singh, is localizing their merchandise mix. “If you go to Scarborough, you’re going to find more Chinese cuisine options and if you go to a Walmart in Brampton, you’re going to see more South Asian options,” he says. “In the bigger city centres, there’s no such thing as the ethnic aisle anymore. Ethnic products are in the high-traffic areas and placed in the categories where they should be found.”

With rising immigration comes the need to better understand customers’ tastes, which can serve up opportunities. “Demographic trends can have impacts [a retailer or manufacturer] might not necessarily consider,” says Mintel’s Gregoire. “For example, a lot of South Asians will pair a spicier meal with a creamier, richer dairy product such as lassi [a drink made from yogurt or buttermilk] or yogurt. If you’re in the dairy business that’s something to recognize. If this is where the growth is coming from, how do you position yogurt as being a complement to a meal, not just a snack? There’s nuances [the industry] needs to understand.”

Overall, Sharma of PTI Foods says global foods will continue to grow, as more retailers get to know the products that consumers want from home and as Canadians try new foods. “Canadians, in general, like trying new things,” he says. “At home, we have every different kind of food throughout the week. So, as it becomes more available, it’s going to help propel it even further.”