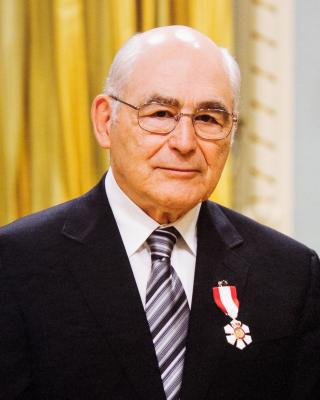 Frank Lovsin, founder and chairman emeritus of Freson Bros., passed away peacefully at home with his family by his side on Nov. 20. He was 88.

Lovsin has been described as a visionary entrepreneur who seized business opportunities while bringing quality food to rural Alberta communities. In a statement, the company said "Frank was a fiercely independent Albertan, who did not mince words to champion what was best for his community, his country and the world at large. Above all, Frank's life was devoted to his family and his craft as a merchant."

Lovsin got his start in the food business back in 1955 when he opened a small butcher shop in the town of Hinton, Alta. From there he grew the business, building it up to a chain of 16 grocery stores across the province, earning Freson Bros. the distinction of being the largest family-owned independent grocer in Alberta.

In addition to his business success, Lovsin also earned many accolades during his lifetime for his philanthropy. Most notably, in 2010, he became a member of the Order of Canada.

As a community and business leader, Lovsin was recognized by his industry peers with numerous lifetime achievement awards as well as by communities including the Aboriginal and First Nations communities in Northern Alberta. He also served as Board Chair of Fairview College, Alberta Mortgage Housing Board, Alberta Energy Board, Alberta Premier's Council and as a founding member of the Independent Retail Grocers Association.

Lovsin is survived by his children Mike, Paula, Doug and Ken as well as his grandchildren and great-grandchildren.