After introducing its “Feed the Dream” Olympic marketing program this spring, Empire has taken the campaign to TV for the launch of Tokyo 2020 with an emotional commercial meant to drive brand love, consumer engagement and sales.

Though it was delayed a year, the Summer Olympics is Empire’s first as an official Olympic sponsor, after signing on in 2019. And while “Feed the Dream” has been used across Empire’s grocery brands, the new ad, which launched with the opening ceremonies last Friday, features only Empire’s Sobeys banner.

“We focused on Sobeys from a broadcast perspective given its national presence as part of our English Canada broadcast investment with CBC,” explained Erika DeHaas, vice-president marketing operations at Sobeys Inc.

The ad, called “Firsts,” connects Sobeys brand positioning as “Canada’s family grocery store” to its direct support for Canada’s Olympians and, indirectly, sports and athletics for all Canadians.

“Firsts celebrates and deepens the emotional and powerful connection between family, food and sport—after all, these three things unite Canadians whether at home or competing for gold on the world stage,” said DeHaas.

The ad, which airs in both 60- and 30-second versions, features a number of Canadian Olympic hopefuls— Jennifer Abel, Andre De Grasse, Ellie Black, Kylie Masse, Sean McColl and Damian Warner. The ad weaves together scenes of the Olympians training with the support of their coaches and family, with scenes of other young children just learning their sports with the support of their family. 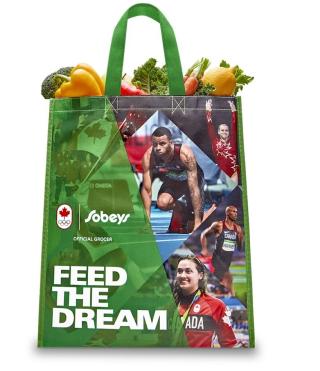 Aside from the TV ad, Sobeys has been integrated into CBC broadcasts through a series called “Family album,” which focuses on stories about athletes and their connection to family.

The broadcast presence is just the latest element of a multi-channel campaign that kicked off in May. Part of the program included inviting Canadians to submit encouraging messages to Canada’s Olympic hopefuls at a special website: FeedTheDream.ca, and through social media.

The themes of food, sport and family support were literally stitched together even further with some of those messages sewn into a special tablecloth to be presented to Team Canada upon their return to Canada following the Games.

“We are so pleased with the positive reception that our Feed the Dream tablecloth is receiving,” said DeHaas. “To date, we have received over 306,000 unique visitors to FeedTheDream.ca and the Games have just begun.”

“Empire’s partnership with Canadian Olympic Committee, and the ‘Feed The Dream’ movement, is not simply a form of marketing,” said DeHaas. “It makes us a stronger, more united company with deeper customer bonds, bringing families together and cheering on Team Canada across the country.”