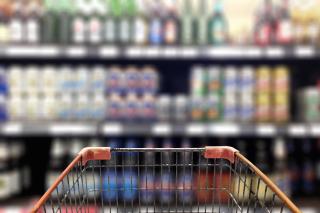 Looks like Canadians are drinking way too much alcohol. According to a recent report from the Canadian Centre on Substance Use and Addiction (CCSA), which includes the assessment of over 5,000 different past studies on alcohol consumption from around the world, our country’s drinking guidelines need to be significantly reduced.

The 65-page report recommends an average of zero to two alcoholic beverages per week to reduce the possibility of suffering negative health outcomes. It’s a stark contrast to the current guidelines, which date back to 2011 and are far more lenient. Health Canada’s low-risk guidelines recommend limiting alcohol to no more than 10 standard drinks per week for women and 15 for men.

CCSA also recommends warning labels be added to alcohol sold in Canada, much like those we see on cigarette packages.

The new proposed guidelines may make sense to health professionals. After all, Canadians drink more alcohol than the global average, according to the World Health Organization. Based on per capita consumption, Canada ranks about 40th in the world, just above the United States.

During the pandemic, many Canadians consumed even more alcohol, according to Statistics Canada. In Ontario, 30% increased their alcohol consumption, followed by the Prairie provinces at 27%, British Columbia at 22%, Quebec at 17% and the Atlantic provinces at 16%. One in five Canadians acknowledged that they have increased their alcohol consumption since March 2020, according to the same survey. We should all be concerned by this.

The CCSA report comes at a time when we are all trying to figure out how our post-COVID life will look. Along with the release of the report, the organization launched a four-week consultation process which intends to update Canada’s Low-Risk Alcohol Drinking Guidelines (LRDGs). This consultation ends on September 23.

These recommendations are based on improved science, but one can only assume Canadians won’t take these recommendations seriously. Notwithstanding the labelling recommendations which will likely be received by the Canadian public with great apprehension, alcohol is very much part of the daily lives of many Canadians. Watching a hockey game, being with family and friends – it’s hard to imagine these moments without alcohol. Alcohol abuse and over-consumption are real issues and need to be dealt with, but most Canadians will probably feel that the proposed guidelines are not realistic.

In addition, governments in Canada rake in millions in tax revenues from alcohol sales every single year. The net income of liquor authorities in total taxes and other revenue in Canada was well over $13 billion in 2021, according to Statistics Canada. Total tax revenues were over $6 billion. Provinces and territories depend on these sales to provide dividends to support public expenditure in various ways. Total revenues from liquor boards from across the country are up 13% since 2016 which really should be considered a reasonable rate. But the balance between strong returns and social benefits for consumers is indeed delicate. The guidelines under study will influence our behaviours around drinking, as well as what health professionals will promote to patients and the community at large.

But what strikes many as strange is the relationship between Health Canada and the CCSA. The Ottawa-based group is supported with funding from Health Canada. The CCSA is essentially a non-governmental lobby which advocates for the reduction of harm caused by alcohol and drugs. When reading reports from the group, it is almost as if alcohol should be outlawed – well almost. In other words, the CCSA’s goal is to raise awareness, reduce the amount of alcohol consumed in Canada and influence policy. It would be like asking People for the Ethical Treatment of Animals to review guidelines for the beef industry. It’s simply impossible to overlook potential predispositions and biases.

For Health Canada, to bring more credibility and perspective to the fore, it would have been more beneficial to either conduct consultation on its own or ask several groups to review the literature and come up with different sets of recommendations. It appears CCSA has the monopoly on scientific thought related to alcoholic consumption in Canada, and it should not. This important issue deserves much more consideration from a multitude of perspectives.

Sylvain Charlebois is professor in food distribution policy and senior director/AGRI-Food Analytics Lab at Dalhousie University. He is the author of "The Food Processor" blog series for Canadian Grocer.  Read More