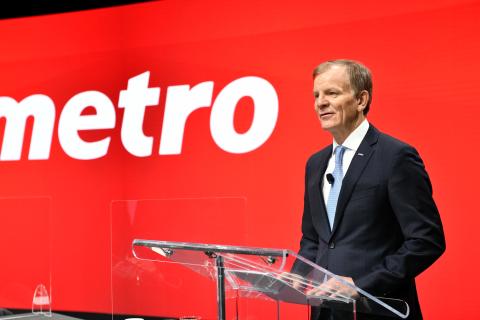 Labour pressures existed pre-pandemic and were “clearly amplified” with the surge in Omicron cases in late December, said La Flèche during a conference call with analysts Tuesday afternoon to discuss the company’s first-quarter results.

And these pressures have been felt across the board he said, from Metro and its multiple grocery banners to suppliers and logistics providers. “We have been challenged, for sure, and you’re seeing some holes.”

Though there are products on the shelves, consumers would have noticed vacancies in the grocer’s assortment. Some manufacturers, for instance, are culling back on product sizes and variety due to labour shortages on their end. But, unlike the early days of the pandemic, customers aren’t panicking, said La Flèche.

“I think consumers understand what’s happening after two years of the pandemic; there’s no real hoarding but clearly there are more holes than we would like to offer our customers. We’re working on it.”

The hardest hit areas are centre store, dairy and frozen but, despite missing SKUs and a lack of variety, customers can still fill their grocery orders, said La Flèche.

It’s been a tough start to the new year, but La Flèche said self-checkout and Quebec’s loosening of the COVID-19 isolation period from 10 to five days was helping mitigate the impact of absenteeism. Though the virus has been anything but predictable, La Flèche said he believed the worst of Omicron’s impact was behind them.

“More and more people that were infected are back at work, both at our suppliers and in our own operations,” he said. “It's improving every day. Every week we're getting better.”

Absenteesim isn’t the only challenge the Canadian grocery industry is currently facing. Much has been reported about the federal government’s vaccine mandate for truckers crossing into Canada from the United States and its impact on supply.

La Flèche said the vaccine mandate wasn’t impacting delivery, but it was impacting the price of products coming from the United States, especially produce.

“We saw an uptick in transportation costs right away, but we’re getting the merchandise,” he said. “Our transportation providers are able to service us for the most part.”

Metro was also up against COVID-19 protocols set out by the Quebec government at the start of the year that forced the chain to close its stores Jan. 2, 9 and 16 in the face of growing case counts.

“It was another element that made our life more complicated, for sure,” with customers moving their Sunday shopping to Saturday or Monday, said La Flèche. “It was a challenge, it’s behind us, move on.”