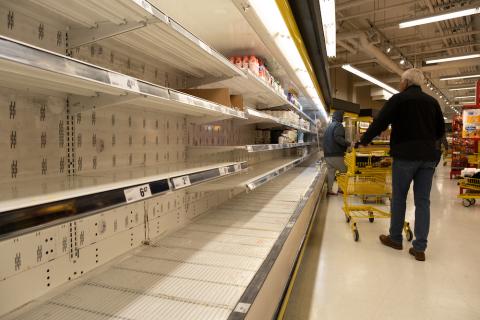 Shoppers might by experiencing déjà-vu in the grocery store aisles, as they come to find some empty shelves and certain products unavailable. Only this time, panic buying isn’t the culprit, but a perfect storm of labour issues, supply chain challenges, and the trucker vaccine mandate.

“It’s challenging, there’s no question about it,” says Michael Graydon, CEO of Food, Health & Consumer Products of Canada (FHCP). He adds there are a number of factors at play, starting with the highly transmissible Omicron variant, which is having a significant impact on food and beverage manufacturers.

“Having the labour we require in the plants to be able to make the food, consumer goods and health products people need is certainly challenged at this particular time,” says Graydon. “I would suggest retailers are having exactly the same problems. It’s impacting their staff and their abilities to not only keep stores open and operational, but also getting products from the distribution centres to the stores.”

Gary Sands, vice-president, government relations at the Canadian Federation of Independent Grocers (CFIG), says staff shortages at the retail level are currently between 15% to 25%. “Nationally, Omicron is just ripping through the entire supply chain and grocery is feeling that,” says Sands.

He adds that the problem has two sides: absenteeism due to employees coming down with the virus and systemic labour shortages in the industry, especially over the past two years. “People just aren’t coming into the workforce in the numbers we’re hoping for,” says Sands.

The federal government’s COVID-19 vaccine mandate for cross-border truckers is making matters worse. Graydon estimates that 25,000 to 30,000 drivers will be taken off the road, in an industry already plagued by its own labour shortages. “Some decisions by our government quite frankly are not ill-advised, but ill-timed,” says Graydon. “I think our industry is very pro-vaccine. But, at a time when we have zero sovereignty on the growing of fruits and vegetables, it seems a very obscure time to close the border to non-vaccinated drivers.”

When it comes to supply chain challenges, Graydon notes that everyone is impacted—from ingredients companies to manufacturers to packaging companies. “You may have your product ready to go, but the packaging hasn’t arrived yet. You may have the jars, but you don’t have the tops,” he says. “So, the whole supply chain is out of whack right now and all these variables are, meaning that CPGs are having a difficult time keeping up with the demand from the retailers.”

How they’re coping harkens back to the early days of the pandemic: manufacturers are maximizing efficiencies and focusing on key products. “There is some SKU rationalization going on,” says Graydon. For example, a manufacturer might have a product that comes in three package sizes, and in consultation with retailers, they’ll produce only the best-selling size.

In other cases, they’ll cut back on the flavour varieties and focus on the high movers. “This helps ensure that the majority of people are getting what they’re looking for,” says Graydon. “If a consumer can’t get a particular flavour of potato chip, they’ll probably buy another flavour that’s available.”

And while the labour shortage may be a systemic issue, there is a short-term fix that can help with absenteeism: COVID-19 rapid tests. CFIG recently came to an agreement with the government and the Ontario Food Terminal Board to have rapid test kits available at the terminal and distributed to retailers.

“That’s a big help,” says Sands, adding that the test kits aren’t limited to Ontario grocers that use the terminal. “We have retailers coming in from Newfoundland, for example, to use the terminal. It doesn’t matter what province you’re from, you’ll be able to get the kits.”

In a bulletin, the Ontario Food Terminal Board said the test kits would be available to all tenants and buyers. “Although all stakeholders would be provided with the test kits, the emphasis is being placed on the buyers who have serious staffing issues because of the spread of COVID-19,” it stated. “Stores are having great difficulty keeping staff at work because of COVID-19 with many staff members off work in isolation protocols.”

The industry’s staffing issues were brought up on a recent call convened by Ontario Premier Doug Ford with CFIG and representatives from the major grocery chains. “[He] wanted to hear directly from the industry, what are the things we can do together to deal with these challenges, and what the government needs to do better to help,” says Sands.

Broader distribution of rapid tests in Ontario and allowing more people into the province under the foreign worker program were among the issues discussed. “[The foreign worker program] is federal, but the premiere reiterated on that call that he is very supportive of that and has been raising it with the prime minister,” says Sands.

While some shelves may be sparse, the industry’s message to consumers is: there is no need to panic (or panic buy). Michelle Wasylyshen, national spokeswoman at Retail Council Canada, says in general, Canadians should have no concerns about food availability. “Some individual items may be temporarily affected by supply chain challenges, but there is no threat to the overall robustness of the food supply system,” she says. “We encourage consumers to look for alternatives and substitutions when the exact item they want isn’t available. We also hope to not see a return to panic buying – this approach doesn’t help anyone.”

There is a question on a lot of people’s minds though: how long will shoppers face empty grocery store shelves? “I think this will be the new normal for another couple of months and it’s going to directly relate to a reduction of the intensity of the [Omicron],” says Graydon. But again, the labour issues won’t vanish when the case counts start to come down.

“The issues that are in labour are bigger than just this,” says Graydon, noting there were 30,000 job vacancies in the manufacturing industry pre-COVID-19, and that number has only increased. “So, there are seismic issues that need to be resolved longer term.”

La Flèche said the last five weeks had been challenging for the company and its suppliers as Omicron cases surged and labour shortages intensified. Consumers would have noticed “holes” in the grocer’s assortment, but they aren’t panicking, he said.

“I think consumers understand what’s happening after two years of the pandemic, there’s no real hoarding, but clearly there are more holes than we would like to offer our customers. We’re working on it.”