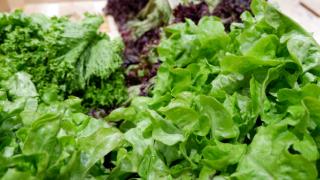 Many consumers have noticed that Canada has run out of lettuce – well, some lettuce, mainly from California. Crops were destroyed by a drought and a nasty virus, according to some reports. This is the time of year when we import plenty of leafy greens, since our farmers can’t compete on such a scale. This has been going on for years.

Over the last few weeks, lettuce is almost impossible to find in big box stores. But if lettuce is to be found, it is 30% to 40% overpriced, on average. Restaurant operators are being asked to pay four times the price for cases of lettuce. Most don’t bother. Small scale and independent retailers and operators would have some in stock, since they often get supplies from other domestic players. It’s hit and miss. Some grocers have learned from the great cauliflower “crisis” when the Canadian dollar dropped and prices skyrocketed in a matter of days. That was in January 2016. Grocers increased prices, but consumers weren’t buying, and tons of the vegetable was wasted. Before importing overpriced commodities, Canadian retailers are thinking twice now.

Don’t despair, though, if you need your leafy green fix for the winter months. Other markets like Arizona, and even Mexico will start shipping lettuce soon, just in time for the busy holiday season. Still, California is drying up, which is a problem for Canada – and it will likely get worse.

We have seen this coming for quite some time now. Short-term shortages, recalls and disruptions coming from California have been numerous. Perhaps not noticeable for most, but certainly numerous. This current lettuce shortage is much more visible and has been amplified by extensive media coverage. This is a clear case of how climate change is impacting our dinner plates. And we are slowly coming to the realization that our current approach to getting leafy greens over the winter months is no longer sustainable.

In California, farmers have had to get water from farther away to irrigate fields, and distances have only grown year after year. As those distances increase, so do risks. Putting more pressure on irrigation systems will lead to supply failures and, of course, food contamination. Poor farmland planning and biosecurity practices led to more recalls, since the water was at times situated next to livestock. The great 2019 romaine lettuce recall during the holiday season a few months before the pandemic when thousands of kilos of product went to waste is a good example.

Canada did farm lettuce before, and lots of it. The first lettuce ever to be grown in Canada was in 1927. The United States did supply us with lettuce before, but our farmers were competitive.  Scale became an issue, which is why Canada started to import more product from the United States. Farming in Canada was very diverse from the 40s to the 80s, just before NAFTA 1.0 came along. About 40 years ago everything changed, and it made more sense to import produce at a lower price. Canada now buys well over $1 billion worth of fresh vegetables per year.

The reality is that we have become dependent on other markets to feed ourselves over the winter months. There was nothing wrong with that model until California and other places started to feel Mother Nature’s wrath. Since climate change is real, Canada needs a plan.

We can always import from other markets, but Canadian importers are already hedging against some import options they currently have by constantly looking for other options. The other obvious path would be to grow more domestically, all year round. But growing lettuce in a controlled environment is capital-intensive and would require optimal plant science and genetics. California’s Driscoll’s recently licensed Canadian farmers to grow their berries in Canada, since the company can’t get water. This could happen to other commodities like lettuce – why not? Instead of looking at international trade as the exchange of money and food, more are considering exchanging intellectual property, while empowering farmers located in desirable topographies. Makes sense.

Climate change is one of our agriculture’s greatest challenges, but it also comes with great opportunities, especially for Canada. We need to think differently about how we do business amongst nations. Growing more at home is nice, but it’s much harder when going at it alone. Partnerships are key.

Sylvain Charlebois is professor in food distribution policy and senior director/AGRI-Food Analytics Lab at Dalhousie University. He is the author of "The Food Processor" blog series for Canadian Grocer.  Read More