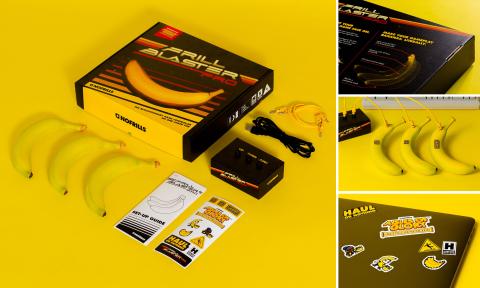 No Frills recently rolled out a bananas idea for its long-running Haulers marketing platform, with the creation of video game controllers made from the popular yellow fruit.

The game controller was introduced as a way to drum up interest in the updated version of its retro style, side scroller video game “No Frills: Aisles of Glory,” first introduced in 2019. The game sees players chasing down grocery items—while avoiding frills like limousines, speed boats and champagne pyramids—to collect game points that can be converted to PC Optimum points.

The controllers use touch technology, connecting three bananas to a circuit board and turning them into the three command buttons. Because the game play is so simple—up, down and jump—tapping the bananas allows the players to move their character as if they were tapping the keys on their computer: one banana for up, another for down and the third to jump.

“We’ve made some legendary changes to the game itself, so we needed a legendary way to play it,” said Jess Willis, creative director at John St, the ad agency that developed the Haulers marketing platform. “And as a brand that lives in the cultural zeitgeist, why not launch this year’s Aisles of Glory expansion in a way that stays true to gaming with a controller all our own.”

Working with WonderMakr, an agency specializing in creative uses of technology, No Frills and John St. only produced seven of the bananas controllers but sent five of them to video game influencers popular on TikTok and Twitch with the intent it would make for watchable video content. (The two other controllers are being given away through a contest.)

One of the influencers unwrapped the special delivery on video for his 1.3 million followers, set up the game controller and recited a short script about the game and the PC Optimum points. The video registered more than 11 million views.

##ad If you think you can get a higher score than me then check it out at aislesofglory.nofrills.ca

The updated game and unique game controller is just the latest in a string of quirky marketing ideas for the Haulers platform that launched in 2018. Aside from the video game, No Frills has created comic book inspired Hauler characters for an ad campaign, a PSA music video encouraging good shopping habits at the start of the pandemic, and “Haulin’ State of Mind,” a music album with 13 songs about the No Frills shopping experience—one of which was recently the focus of a segment on The Tonight Show with Jimmy Fallon.